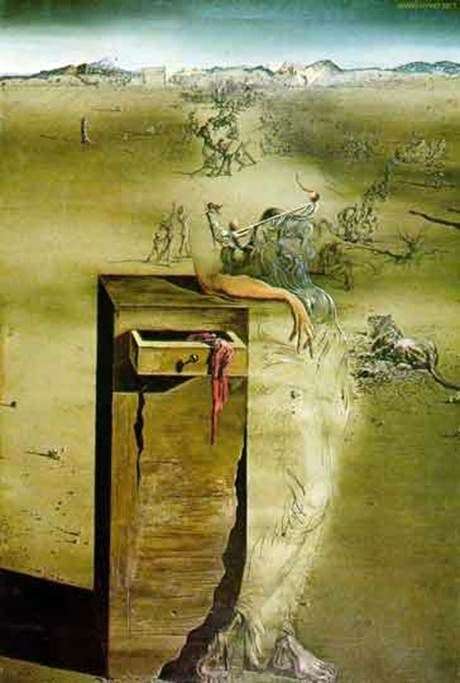 Spain is the home of Salvador Dali, his home. Therefore, the fact that he cared, was interested in her fate, is quite natural. Therefore, he turned to the motive of the civil war, depicting it in his usual surrealistic unique manner on canvas (91.8 x 60.2 centimeters) with ordinary oil paints in 1938. The work is strongly reminiscent of the “Adoration of the Magi” by the notorious Da Vinci in terms of depth, color and construction.

In this work of his own, Dali depicted a desert that was quite familiar to the eyes of admirers of the artist and art historians. Before us, the Spanish plain stretched out on almost the entire canvas, taking on the color of coffee mixed with milk due to the mixing of dust, dirt and sand. In the distance, near the horizon you can see mountains, some kind of building, it was erected not from sandstone, not from limestone blocks, but maybe from some unfamiliar stones to the philistine. The sky, also visible somewhere far ahead, is dark, gray and muddy. It is more like a mountain plateau in the fog, how you can see it, if you fall on it from somewhere above.

Closer to the viewer is a huge, simply giant pedestal, which has only one single drawer at the top. It is slightly extended. His pen, more like a bronze pin, seems completely new. Something resembling both a red (bloodied?) Rag and human entrails is about to fall out of the box. A woman, whose silhouette is drawn from the figures of the military and the animals, scurrying around in chaos, rests on the cabinet.

Obviously, she is wearing a dress. By the way, she, judging by the features, is a real Spaniard. Therefore, her name is Spain – a deserted, suffering country, which, if it were a living person, would cry with bloody tears during events that are called “civil war”.