Home ⇒ 👍Monuments ⇒ Description of the monument to Stolypin in Moscow 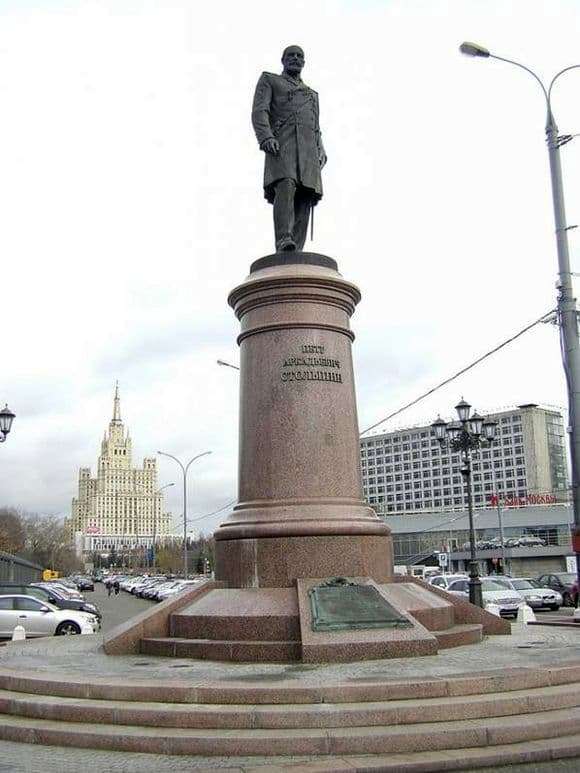 Many established monuments in our country. Some of them are pleased with their spontaneity, while others carry a deep philosophical meaning, others are set in memory of some figures or events. One of such monuments is a pedestal in the center of our capital – Peter Stolypin.

He was cast in bronze to deliver on the day the politician was born. This event happened in 2012. But even 10 years before this cultural event, there was talk of creating a monument to Stolypin in Moscow, but the commission that is responsible for the construction of monuments in our country decided that one monument, which exists in the Northern Capital of Culture, would be enough. It was decided to put another pedestal dedicated to the writer Andersen. But there was a crisis, and the monument was not destined to stand in the capital.

Once again, the commission decided to build a monument to Stolypin already in 2011, and then it was voted for the creation of a pedestal to a politician who influenced the course of our country’s history.

The issue of financing then did not decide. To create a monument fought several projects. All of them offered their ideas for the creation of a monument. But the decision was made in favor of one. Building a monument to Stolypin was allowed to the team, which included young sculptures. Headed them Plohotsky.

It is noteworthy that the president decided the question of money with his personal example. He created an account at the bank, which should have received funds for construction. And the first who contributed a large amount was Vladimir Vladimirovich Putin himself. He has invested his entire monthly wage in the common cause.

After that, Finance Minister Kudrin, who did not stint with his salary for a month, served his example. Thus, the beginning of the collection of funds for the construction of the monument to Peter Stolypin.