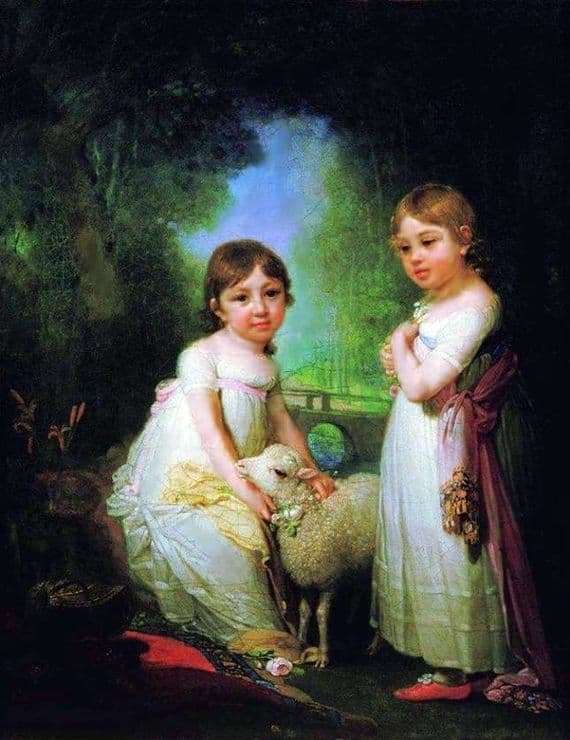 The picture is painted in oil on canvas in 1790.

Borovikovsky – is one of the great and last artists of the Enlightenment. He was born in Ukraine, created many canvases on the historical and church theme. He was a master of portraiture. The beginning of his work was in childhood. He was born in the family of an icon painter, which influenced the formation of his creative preferences. Borovikovsky began to paint icons and paintings on religious themes.

The next stage that changed his whole life was the visit of Catherine II to the Crimea. She saw the artist’s canvases and was impressed by them. Catherine ordered to acquaint her with the author, after which he fell under her grace for life. Since then, he moved to St. Petersburg.

The canvas “Children with a Lamb” was created in 1790, at the beginning of the heyday of the artist. Then it was created many famous paintings that could compete with the great canvases around the world. Borovikovsky was able to convey in detail very accurately the images of people of that generation. His canvases are filled with romanticism and lightness.

Borovikovsky had no family, he had no children. He led a closed way of life, giving himself to creativity and religion. But, despite the fact that he had no children, he painted their portraits with special tenderness and love.

Two little ladies are depicted on the “Girls with a Lamb” canvas. According to their clothes it is clear that the girls from a rich family, perhaps they belonged to the royal court. They are wearing beautiful dresses and shoes, peculiar to the fashion of the time. They are very similar to each other, which means that little ladies are sisters. Only hair color distinguishes them from each other.

On the canvases of Borovikovsky you can often find animals. They give the work an additional meaning. The girls, along with the lamb are located in the foreground of the picture, they are his main accent, as if specially illuminated by the rays of the sun.

Nowadays, it is not known what techniques the great master of portrait and church painting used. It is known that Borovikovsky was left-handed.

The canvas is stored in the Ryazan Regional Art Museum.