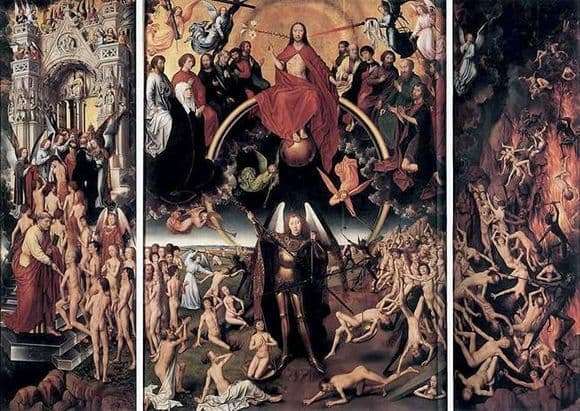 One of the most famous and significant works of Hans Memling is a triptych for the monastery church called “The Last Judgment”. The approximate time of its creation is from the 1460s to the 1470s. The customer was a secured representative of the bank in Bruges.

The painting work consists of a large central part and narrower shutters on both sides of it. On oak boards, biblical scenes are made with oil paints.

The Flemish painter expressed in the picture his understanding of the terrible Apocalypse. The main and central compositional figure is Christ sitting on a rainbow, which designates the connection between man and God. In general, the canvas is replete with similar symbols. For example, the sword and the branch of lily at the head of Jesus bear a deeper meaning: on the one hand, denoting charity, on the other – fair judgment.

The chief judge is surrounded by his “retinue” – the apostles, the Baptist, and mother Mary. Angels hold in their hands the signs of the Passion of Christ. The background behind these figures is ablaze with fire on the black sky.

At the bottom of the central canvas, the leaf is divided into two parts by Archangel Michael, weighing the souls of righteous and sinful people. On the ground, the devastated graves are visible, of which the dead rise to participate in the Apocalypse.

The right wing of the triptych shows a hell burning with flame, with black figures of demonic creatures and bare human figures interlaced in a heap. The left picture has the opposite content – here the gates of heaven await the righteous; calm, peaceful men and women rise along the crystal ladder.

What is the feature of Memling’s “Last Judgment”? A grandiose work was carried out in which the author showed himself as a brilliant portrait painter, depicting genuine emotions of people, and in bright colors he combined a multi-subject picture into a single whole.