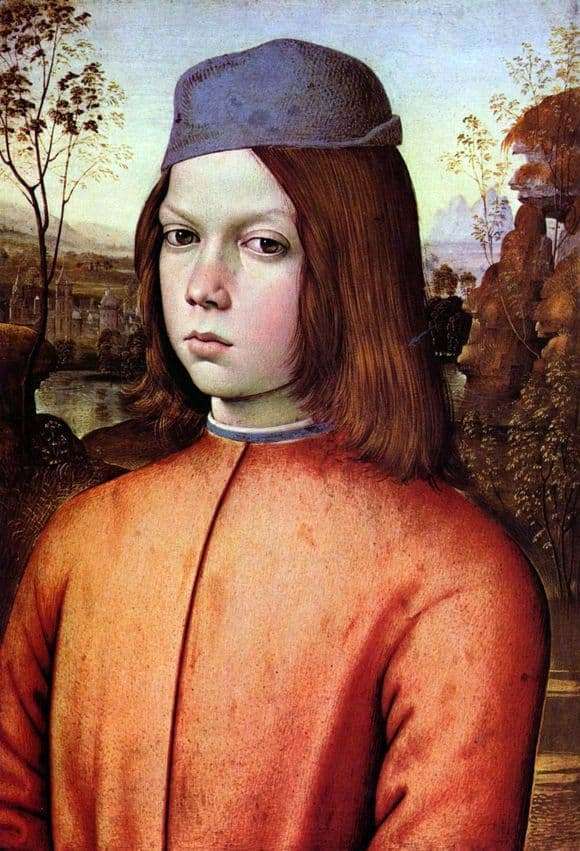 The boy in the portrait is depicted on the background of nature. One can see the city, green bushes, a distant grove, trees, with transparent brown leaves against the background of the dawn sky, yellow at the horizon. Autumn reigns around, cool, early, golden and beautiful. Flower overflows would be beautiful, even if they were an independent landscape.

The boy, turning them into a portrait, looks like their flesh and blood. He is dressed in a red shirt with a grayish hat. Brown hair reaches to the shoulders, the face looks as gentle as a girl’s. The nose is reddish, as are the cheeks – apparently, the weather is already quite cool – the eyes are dark, the lips are plump, and the chin seems to be too soft, not manly slanted.

However, the expression of the boy’s eyes will suit an adult man. He looks at the viewer seriously, as if he disturbed his peace or does not want to answer the question that was asked of him. So a young squire of a noble knight might look at a peasant refusing to refuse him a way, or a young prince at a dragon who does not want to let him pass to the princess. The boy’s head is thrown back, his chin slightly raised, he looks down, as it were, and this position is obviously familiar to him.

Perhaps he is the son of a rich man or engaged from birth to a noble family’s daughter. And, maybe, just his character is characterized by gloominess and heightened self-esteem, which does not allow him to look at someone from the bottom up.

He looks about twelve years old. He is just beginning life, and life already seems to him to be a rather amusing, though not deserving condescension place. Perhaps he saw someone’s death, or faced with misfortune. Childish seriousness in his view, and, perhaps, what seems arrogant, in fact, only some question, tormenting him – the meaning of life or the meaning of his own birth.