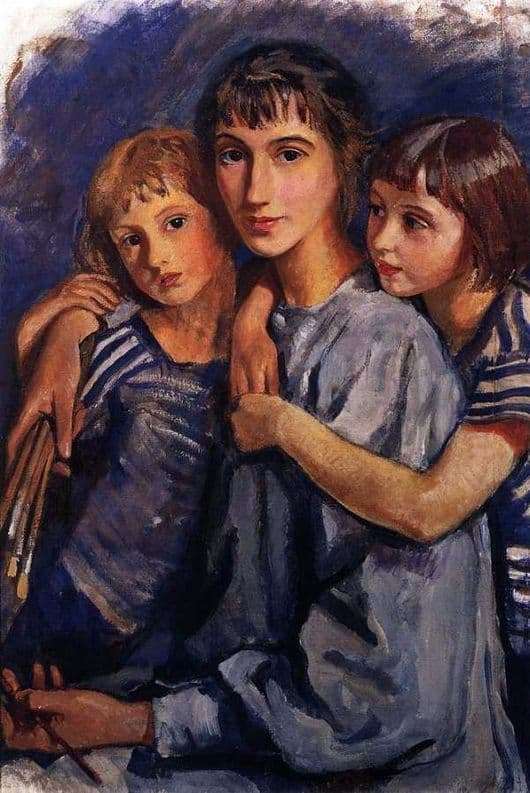 Zinaida Serebryakova is one of the first Russian women painters to inscribe themselves in the history of painting. Her creativity, not under any influence, is quite independent and original.

The picture “Self-portrait with daughters” was written quickly, easily. The impression, as if two little daughters, having caught the moment, clung to the mother, when she decided to take a break, in a working shirt and with tassels in her hands. Faces, hairs are not written out carefully, but smoothly, bulky, academically, as in the sketches of the old masters, and in the clothes and the background one can see incompleteness and negligence, which gives the picture more modernity.

Girls look like seven or eight years old, they are dressed in “vests”, which in those years could often be found on children. A mother of about 35, but her face seems so young – so young – like that of girls who have nestled on it. The face is oblong, a straight long nose, a beautiful neck, and in outline and in a look simplicity, nobility and modesty is seen. Look open, kind and clean, deep. Self-portrait is a personal work of the artist in which he can most clearly and clearly show his spiritual inner world and express himself in a way that we may not know.

Children embracing her say that without them she cannot imagine her life, they are an important part of herself. In this is expressed its feminine nature, its essence. In fact, it is so – Serebryakova, after the death of her beloved husband, did not see joy in anything other than her children – their existence encouraged her, gave her strength, life. This can be said by how often she depicted her children in numerous canvases.

Children – this is one of the main themes of her paintings. Serebryakova, by the way, was the granddaughter of Benoit himself. Thanks to her connections, she was even offered the place of a professor at the Academy of Arts, she, by her modesty, refused.