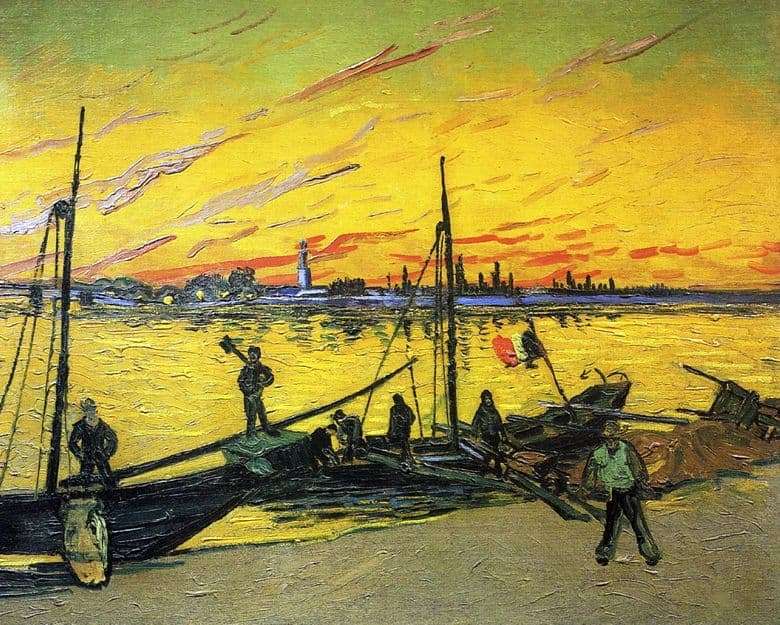 The painting “Coal Barges” was painted by Van Gogh in August 1888 on the shore at the pier on the Rhone. The artist liked to depict nature at sunset at the end of a tiring day, it seemed to him especially beautiful. This landscape was inspired by a coal-loaded barge after the rain. And he even wrote to his brother Theodore about how he was impressed by the rare effect that he observed on Ron’s wharf when he looked at the coal barge after a rainstorm.

From the height of the pier, he watched as the barge glistened with humidity, and the river changed its color incredibly at sunset. The water in it became yellow-white and dull-gray-pearl shade, the sky was purple, with the exception of the orange strip of sunset, the city was purple. On the deck, blue and dirty white workers were seen unloading the ship. And Van Gogh recreated this landscape, which impressed him so much. He wrote a yellow-green sky, which is permeated with diagonal pasty strokes of red, lilac and orange. The skyline in the background is a silhouette of a city whose architecture is reflected on the surface of the water. Only a few buildings have a lilac glow.

The river is covered with small waves and displays on its surface all the beauty of the sky color at sunset. In the foreground of the canvas are coal barges on the pier of the Rhone River. Despite the late evening, the workers continue to work, unloading coal in carts to the shore. The barges and people are already immersed in darkness and painted by the artist as silhouettes in dark colors, only with one worker you can disassemble the green-colored shirt. Van Gogh often wrote ordinary people of the working class, who work from early morning until late evening.