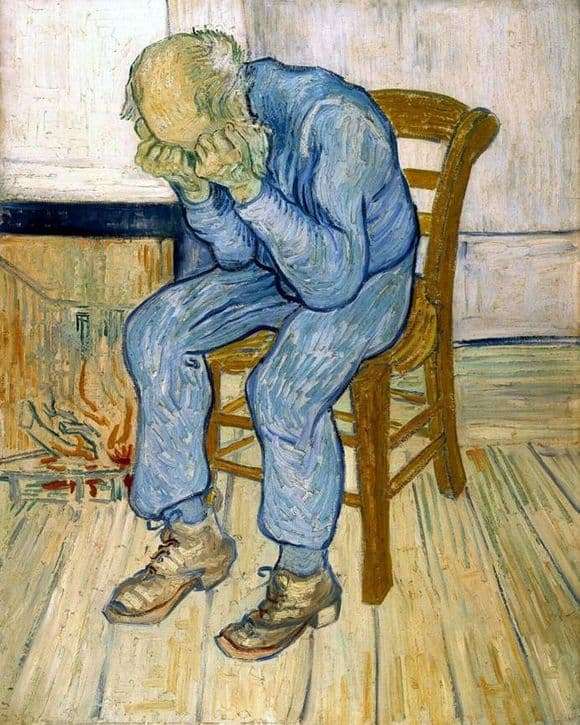 Van Gogh has always been a topic of life. Its ephemeral, its fragility and at the same time strength. Unhappy man, hardworking, stubborn and refusing to stop hoping even in the most hopeless situations, he wrote many times and despair, and dream, and indomitable will to live, embodying it sometimes even in the most unobvious things like sunflowers.

“On the threshold of eternity” is one of his rare paintings depicting a man. The first sketches for her were made in Etten, where Van Gogh sketched local residents, and where he met an old, seriously ill peasant, who eventually turned out to be on his canvas.

The picture shows an old man sitting on a chair near the fireplace. His whole pose expresses despair – his back is hunched, his hands clenched into fists, cover his face, his elbows rest on his knees. He is obviously broken by some kind of grief, and around his figure the whole composition of the picture is built, on which, besides him, for the most part there is nothing.

There is a fireplace burning behind the grill – the flames are depicted schematically, with light brush movements, without a hint of realism. The wooden floor is unpainted, the walls are whitewashed. The chair under the peasant seems unsteady, swaying, ready to throw him off at any instant.

Depicting despair, Van Gogh is also detailed, as in the image of happiness. The boots of the peasant crawled, they are already very old and it is clear that they walked a lot in the mud and in the rain. The costume, despite the sketchiness of the image, looks worn. His hair recedes, exposing his bald spot, his beard carefully trimmed, and it is clear that this man lived a long life, for which, if he saw happiness, it was rarely on holidays. Hard work, poverty, and now also a disease.

And despite this, the picture looks strangely light. As if even seeing fear and pain, the artist does not want to part with the thought that life can still be beautiful and that hope – painful and sweet at the same time – is always there.