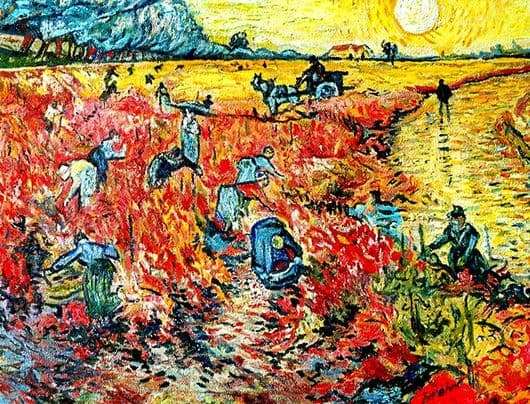 In 1888-1889, Van Gogh lived in the southern part of France in the town of Arles. It was there that the artist was inspired by beautiful landscapes. Walking through the October afternoon in the vicinity of Montmajor Abbey, he watched as the locals gathered a ripe vineyard in the color of red wine. The riot of colors of the southern autumn and the symbolism of the harvest so impressed Van Gogh that within only a month one of the most famous works of the author “Red Vineyards in Arles” was created.

The harvest of the vineyard symbolizes the flowering and the decline of the natural cycle. For Van Gogh, the sun is the source of life and prosperity, and the hot midday sun is full and sunset. A man who comprehends its rhythm in labor and constant movement is woven into the cycle of the universe. Visually, the picture is divided into two equivalent plans. The first one shows people collecting grapes, and a little further you can see the figure of a man on a cart and trees.

It seems as if under a hot solar disk everything is melting: people and a vineyard merge together, interweaving into a thin canvas of the universe. The effect of the merger is created by a special technique of imposing smears, so characteristic of the work of this artist. Incredible color scheme, which has become one of the hallmarks of Van Gogh’s work, fills the picture with life and external light. The author does not mix paints using the technique of imposing contrasting strokes, most of which belong to warm tones and only occasionally come across cool purple shadows.

The features of the painting reflect the fascinations of Van Gogh’s youth, when he, working as a bank clerk, bought paintings of the artists he liked and had an extensive collection of impressionist works.

At the end of the work, the canvas was successfully sold to the artist Anne Bosch. In consequence, it was acquired by collector Sergey Schukin. In the process of nationalization, the picture was taken and placed in the Museum of Western New Art, from which the “Red Vineyards in Arles” was moved to the Pushkin Museum, where it remains to this day.