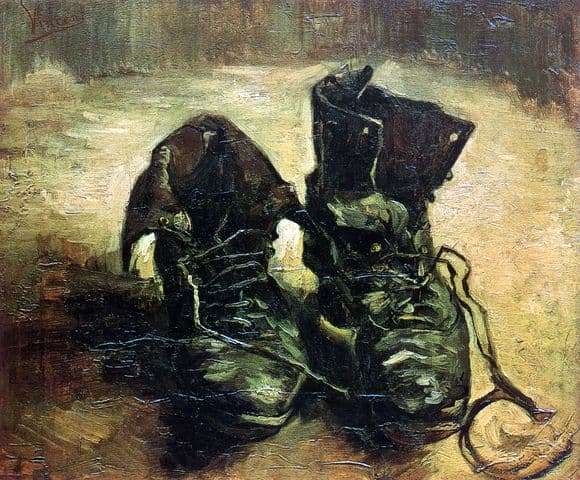 It took several weeks for Van Gogh to find shoes suitable for the picture. And then, once he returned from the market, he brought them home – battered but still good, repaired before sale and put in order, which probably belonged to something working.

For a while they simply stood in the corner of the workshop and seemed to occupy a seat. But it started to rain, and Van Gogh shod them (despite the fact that they were great for him) and walked for a long time in the rain, without fear of any dirt, getting into puddles and, perhaps, even enjoying the walk. When he came home, he put the shoes on the floor and decided that now they were ready to be transferred onto the canvas.

Bashmaki is a very wet picture in which it seems to be raining. A wet pavement, a twisted dry leaf, barely marked circles scatter from drops, and in the midst of a real puddle there are two shoes – such as the workers wear. They are obviously old, shapeless, and the place for them, in an amicable way, is in a landfill. But despite this, they retain some sad dignity of a thing – a thing that served well, that fulfilled its mission and, although it was worn out, it can still serve a undemanding person.

When you look at the “Shoes”, you can not help remembering the fate of Van Gogh – the restless tramp who did not find solace during his lifetime. He was not accepted in his hometown, and he often was obsmeyan, drank, enjoyed the glory of a complete loser, and moreover a talentless man. Often he left Paris in search of inspiration and comfort, but did not find it, and returned back with new paintings that no one bought, with new ideas that no one needed.

Like the shoes from the picture, he could be useful, and considerable, and instead he spent his whole life on the road, in the wet mud, in the rain, not really needed by anyone.