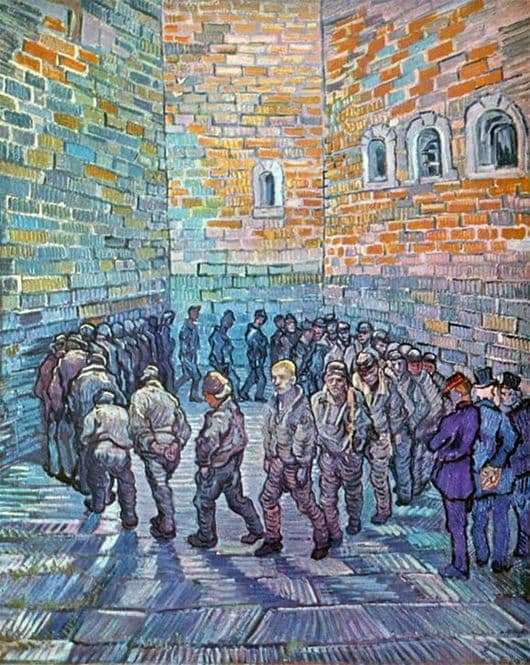 The picture was painted by the artist in oil on canvas. Very deep, reflecting the entire tragedy of the life of the author himself. The essence of the image is reduced to the figures of prisoners who roam in a circle, carrying out a day walk. It passes under the watchful and vigilant supervision, which further aggravates the already sad situation of these people.

All figures are depicted the same, only the position of the hands and the rotation of the silhouette change. And only one character stands out among all. He is depicted in the center of the picture. On his face is anguish and hopelessness, despair from the inability to overpower fate. In this image, traits of the author are guessed. After all, 1890 is the time when Van Gogh was treated in a psychiatric clinic, which could not help but leave an imprint on his creations.

The place where the prisoners walk is reminiscent of a large gloomy stone box with windows. The high walls and the floor are lined with brick, everything is cold, stone, heartless. The artist does not show the slightest bit of the sky, which emphasizes the gravity of the position of the people depicted.

The color scheme of the picture is a combination of blue, green, orange and purple hues. It would seem that it should be bright and colorful, but everything is quite the opposite. Van Gogh managed to convey such bright colors of cold and alienation, retreat and hopelessness, the tragedy of human destinies.

Looking at the depicted landscape, the heart just freezes in pity for the author, for prisoners and in general for all people who have lost themselves, broken, unable to go against the will of fate and correct their situation. Therefore, the overall impression of the picture, of course, painful. It makes you think about the tragedy of human lives, about the cyclical nature of the universe, about the essence of being. Gives to feel the troubles of other people, their sorrows and sufferings.