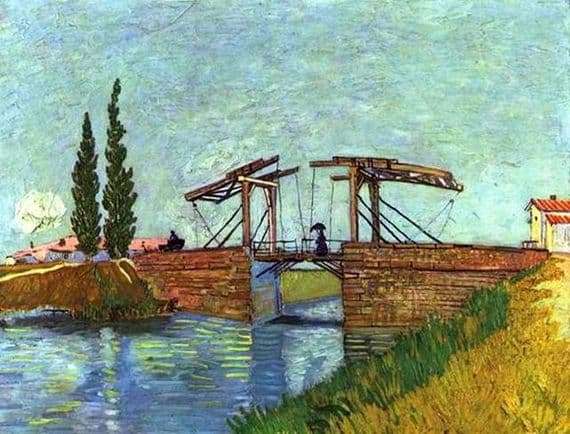 Van Gogh – the famous Dutch painter, who saw the world in his special style. During life, he didn’t gain popularity and understanding, did not know how to make money, died in poverty and obscurity, and only after his death did a celebrity come to him. While he was still alive, he wrote letters to his brother, worked in many jobs, served as a laughing stock and, in spite of this, continued to paint, because he felt that only this occupation was worth it for him to do. Nothing could break his willpower, falling, he rose again.

Anglois Bridge in Arles – a kind of landmark place for Van Gogh. He wrote it repeatedly when he left stuffy Paris and left for the south of France in search of his promised land, which would heal and inspire him. Representing Japan as a beautiful wondrous land, where everything is different, he was satisfied that he was leaving for the south of the country instead of Japan, and painted pictures there one by one, getting exhausted, working wearily, returning home, staggering and getting up in the morning with gray circles under the eyes. He was fascinated by this particular bridge.

According to him, Van Gogh measured, whether his talent grew, whether his skill changed. Probably, he was attracted by wheat fields or women washing clothes coming to the river. Perhaps the life of the old bridge, on which people constantly walked and rode.

The Bridge of Anglois in Arles depicts a bridge in the summer afternoon. A river flows lazily – molten gold of sunshine splashes in its waters. On the bridge goes a lady in a black dress, with a black umbrella. Waves in the wind of the field, swinging trees. The cottages reflect the sunlight tiled roofs.

Like any work by Van Gogh, “The Bridge of Anglois in Arles” is imbued with a love for the world. The colors chosen are very bright, saturated, juicy, capable of conveying summer, the strokes are applied fast, small, you can see each individually – they do not merge.