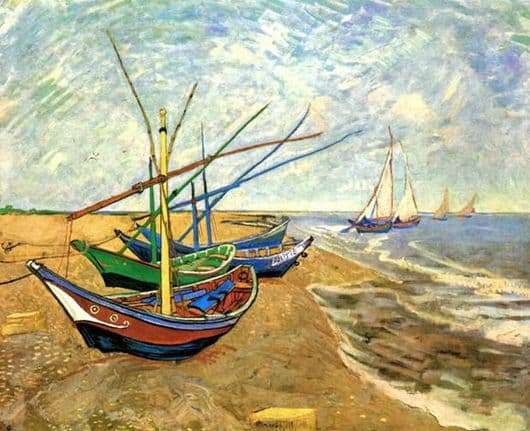 Vincent van Gogh’s canvas, written in 1888, now exhibits the name of the author himself in the Amsterdam Museum. He depicts all the objects in a manner unusual for him, there are not those customary thick strokes that we are accustomed to regularly observe in the works of Van Gogh. The canvas presented before our eyes is made differently, it is full of lightness and weightlessness, each detail is spelled out in quite detail. Is that the sand in the foreground and the sea waves on the right may slightly push on the author’s style. But the general perception is very different from most of his works. It depicts in the foreground a quiet pier with boats. Every detail is described accurately and in detail. For the design of the canvas the author chose very bright and colorful tones.

The picture is full of multicolored boats on the background of brown-golden sand and bluish, transparent waves. The bright sky is strewn with numerous snow-white, cirrus clouds, it seems that a strong wind will soon catch the pier. The nearest ships are written quite graphically and vividly. The keel, masts and hull have detailed contours. In the very center at the bottom of the picture one can see a small golden casket glistening under the bright morning sun. Another yellow chest is in the sand, a bit to the left. The waves are all approaching, as if they are taking the nearest boats and taking them to the sea with them.

For some reason, there is a sense of the vibrancy of nature and the wooden structures themselves created by man. Although there are no people here, the beach looks absolutely lonely and abandoned, but at the same time, there is an atmosphere of meaningfulness and independence of all elements. The boats, as it were, decide for themselves when to go through the sea waves full of dangers and adventures.