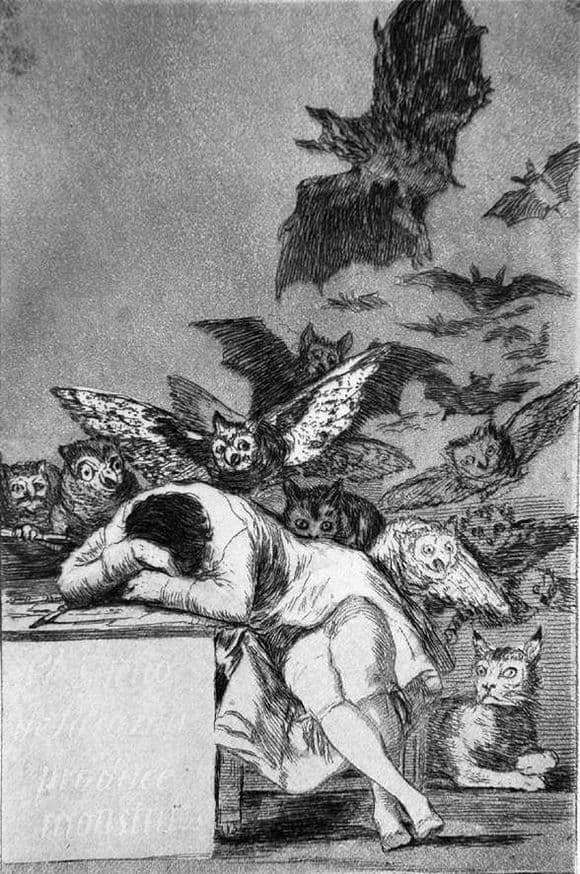 Francisco Goya is a famous Spanish writer who completed his famous painting in 1798. He wrote it for two years. This canvas was included in the cycle of paintings, under the general title “Fantasy”. The artist depicted the whole country with its proverbs and sayings, which were at the peak of the popularity of that time. Initially, he had the idea to call his work “Universal Language”, but then he decided that all this would be too bold.

He portrayed all his alertness, anxiety, and feelings as a dream. The artist was alarmed by the society of the era in which he lived. Thus, Goya decided to express his opinion, to ridicule vices. This picture is terrifying, fearful, not accepting of reality, hatred of the whole environment in which he is forced to come.

The sleeping person, was closed from reality by hands, he thus expresses unwillingness to life. This picture is a self portrait. The author portrayed himself, immersed in a deep sleep. To him during sleep come various monsters, unthinkable monsters. Looking at this picture, it seems that these visions accompany him not only in a dream. They are relevant in life. There is no rest from them, he is tired.

The author himself is trying to clarify that the non-working mind, the mind leads to such a plan of fantasy. He mocks the vices of the whole society. Not a few years have passed, this picture remains just as relevant in our time. He calls for vigilance, control over his emotions and actions. Goya is trying to convey in his picture the idea that in the uncontrolled world, such monsters are found in real life, in the form of the vices of society.

When consciousness is turned off, the mind is asleep, it is easiest for the monsters to take possession of the person, his thoughts. Unfortunately, situations of a blackout are not only in a dream. The artist encourages humanity to common sense.