Home ⇒ 🎨Levitan Isaac ⇒ Description of the painting by Isaac Levitan “After the rain. Ples 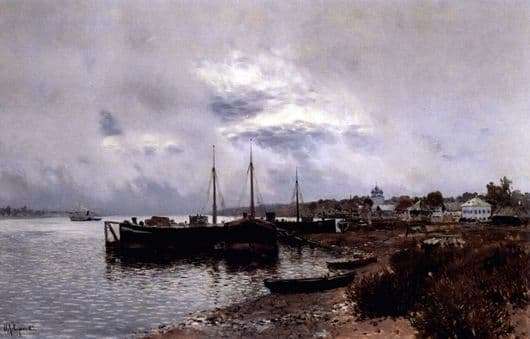 I. Levitan painted the painting “After the Rain. Ples “in 1889. On it, he depicted his impressions of the Volga, which were collected when he was on this great river.

This work is very significant in his work.

This canvas shows the daily life of the Volga. A lot of space is occupied by the image of the coast – nondescript, rare bushes, urban buildings on the outskirts.

Apparently, the rain had recently ended and left puddles, humidity is felt in the air. Through this cold, bleak weather, one gets the feeling that it will soon be warm, thanks to grayish clouds, through which the suns rays are trying to penetrate and touch the earth. And the coast covered with stones, and not yet dried roofs of houses and bushes – all this illuminates the iridescent light.

On the left side of the canvas is a river, on it are the pier and barges. It is associated with the work of people who live in the city – it is the porters, fishermen. Not far from the coast are their poor houses. In the distance, on a hill, a white church with blue domes can be seen. Thanks to her graceful silhouette, the piece looks more elegant. Levitan expresses on this work the thought that the spiritual world of people and steamboats, the river, the pier are interconnected. The center of the canvas is occupied by three masts of small ships, like three church domes.

This work is distinguished by the luxury of the means used, thanks to which the creator was able to show the natural freshness after the last rain, and how harmoniously the churches, the barges on the river, which the ripples cover, the dwellings, the people themselves live with.

In this picture, Levitan appeared before us both as a talented artist and as a person with a big heart. He seemed to have written a lyrical story about the inhabitants of the country, depicting a small city on the Volga coast, steamboats, barges, nondescript houses and a church.