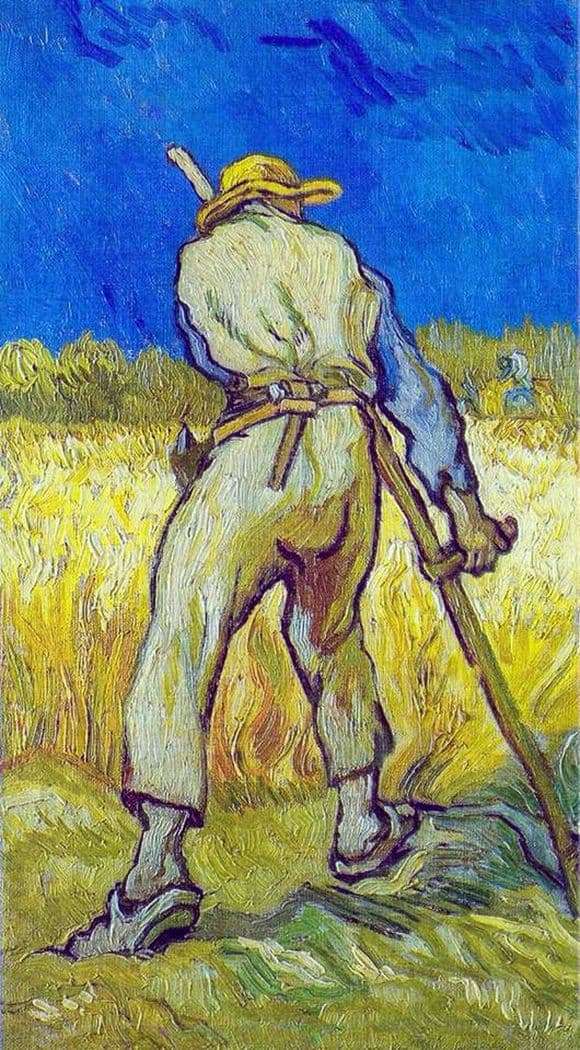 The painting was written in 1889. At first glance, it is very simple and unpretentious. It depicts a man who, with the help of a scythe, mows wheat in the field, turning his back to the viewer. No small items, or with the particular complexity of the details worked. Above it is a bright blue sky, and the picture itself seems painted in a hurry, if not a child, and not a great artist. But everything is not as simple as it seems at first glance. First of all, the artist had his own, sinister look both at the hero of his picture and at the meaning that she carried.

According to him, the picture shows not just a reaper. He represents for himself in the form of death itself. The one for which the bread that the reaper collects in the picture is human lives. In this case, Van Gogh personifies death in such a way that nothing sad is seen – everything is flooded with bright rays of pure gold. Such an interpretation of the picture even sounds quite ominous. At the same time, the picture was painted in warm yellow tones, and the sky looks bright enough, nothing at all says that the man in a straw yellow hat and slippers is death itself. Somewhere in the distance, closer to the horizon, there are trees, the greens of which are already fading under the influence of the hot sun.

The hero himself is dressed in yellow pants and the same vest, under which lies a blue shirt. He has a straw or cloth yellow hat on his head, which is trying to cover him from the sun’s rays. He skillfully wields a scythe, and tools sticking out of his belt. He is not in a hurry, his ears of wheat flourish, mowing step by step.