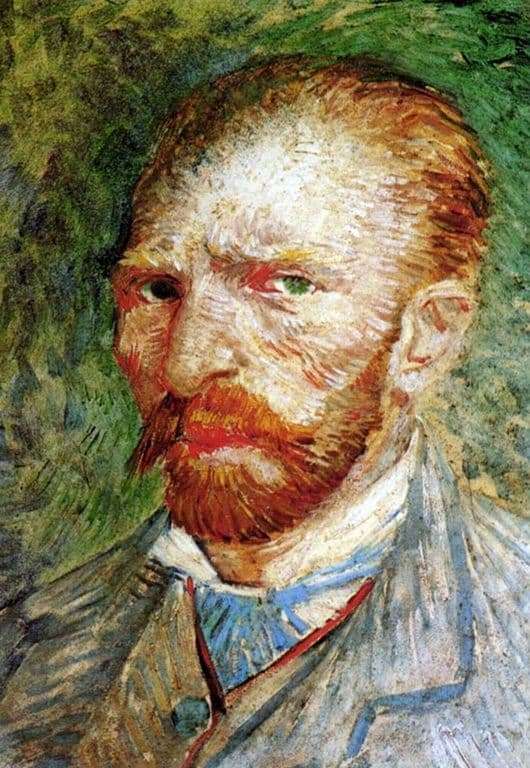 The artist Vincent Van Gogh painted a large number of paintings entitled simply “Self-portrait”. Among such an abundance of images of the famous creator, we will focus on the self-portrait of 1887/88, painted in oil on canvas in Paris.

Before us is the face of a man who has passed beyond his mature years. His eyes are black, somewhat frightened and a little preoccupied with something seen or experienced. The beard on it is red. The features of the face are somewhat thin, the nose is rather large.

There are a lot of mimic wrinkles on the artist’s face, especially eyebrow folds are clearly visible, indicating that the author frowned while writing this work. His mouth is slightly parted in exhausted distraction.

The overall feeling of the portrait is painful. The hair on the head of a man is light red and combed back; balding hair and bags under his eyes are very well drawn on his forehead. The face resembles the color of faded autumn foliage, the skin of the forehead is pale. One ear is neat and can be seen very well in its rounded shape, the other is sticking out, but due to the half-turn of the head it remains invisible to the inattentive viewer.

The neck of the artist is short and very thin. The white shirt is buttoned at the top button, the lapels of a brown jacket are located close to the neck and are decorated with small stripes of ocher color. The whole picture is somewhat rippling like an old black and white movie and creates in us the feeling that we see a certain chronicle, almost a fading personality.

The picture is dominated by red, brown, ocher, black and greenish, with yellow streaks – colors. The brushstroke technique is rather large, so the canvas looks more like a panel made of wax or colored clay. Despite the fact that the author is a recognized person, the picture looks rather mediocre.