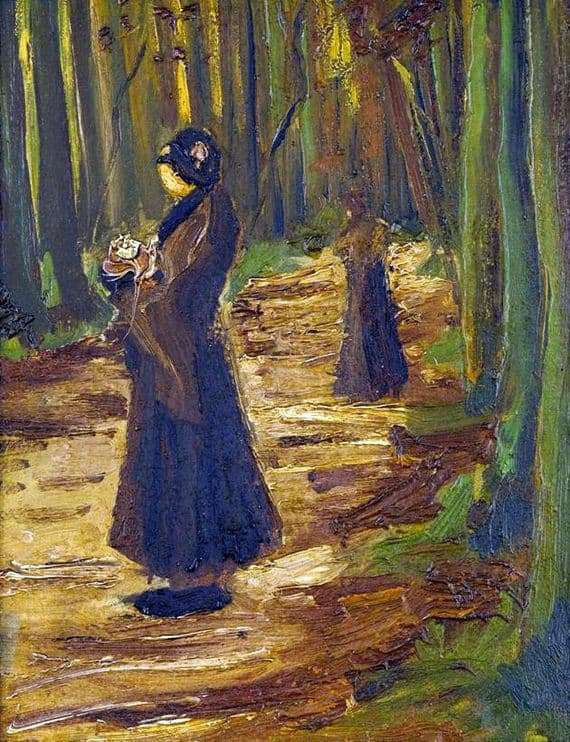 “Two Women in the Forest” refers to the early works of Van Gogh. And they can already be considered such familiar essays by the artist, who accompanied all his work. Early works are distinguished by dark tones, the search for truth, the meaning of life and the beginning of all life.

His work “Two Women in the Forest” was also performed in dark colors that convey the darkness, danger and loneliness of the autumn forest. Women supposedly its integral part, dark, confused, lost in their lives. They are located in the very center of the composition, so they immediately catch the eye.

Their raincoats are made in the appropriate colors, but they are much darker than trees and everything else. It is the contrast of this technique that causes the viewer to immediately look at them. One of the women is a little closer to the foreman to the contemplator. She is holding a bundle of some kind. The other, turned back, as if holding hands to the face.

There is a thick forest around these dark figures. So thick that you can see even a glimpse of the sky. Around only branches and trees. At the same time, the Van Gogh forest fulfilled everything in the same brown-green color scheme, but much lighter shades. The forest is as if from the inside filled with sunlight and fresh air. The gold-covered walkway is the brightest spot on the entire canvas. It seems to symbolize the onset of autumn, showered foliage. And autumn is a time of sadness and sorrow.

Looking at the picture, you can immediately notice the dense relief strokes. The paint is applied with a very thick layer, and this gives the impression of the bulkiness of some figures. The picture is almost no thin uniform strokes, thin outlines and lines. All it is made thick spots, merging into a single whole golden-green forest. And the yellow forest path is the only way home.