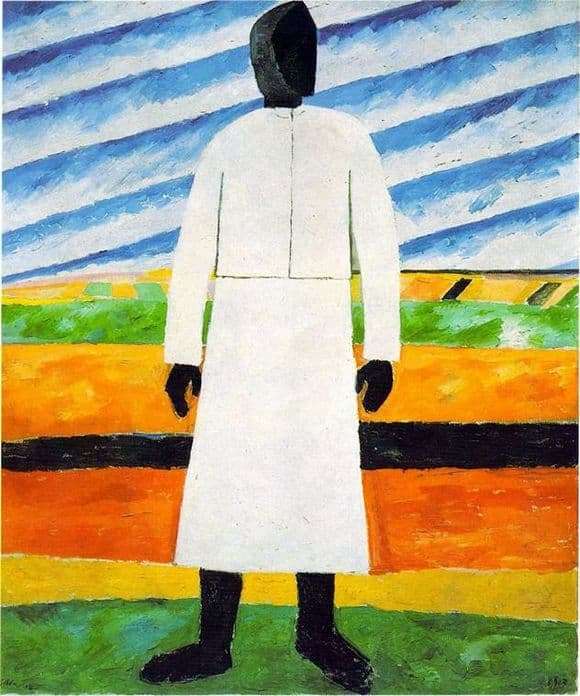 Kazimir Malevich created the “Peasant Woman” in the 1928-1930s. He remained true to his traditions: volumetric geometric forms of dazzling shades, disproportionate parts of the body, minimalistic background, people completely devoid of individuality.

The artist depicts his character with a black oval in place of the head, with his hands limp and powerlessly lowered, a white robe indicating that it is a woman. The figure stands on strips of color field contrasting to each other.

There are no other bodies in the background: here the author also remained true to his style. However, a distinctive feature of the “Peasant Woman” is the contour of her dress. Malevich loves to saturate his works with various shades using a gradient. Comparing the black and white woman with the general multicolor can indicate that her image is gloomy.

Watching the canvas of the viewer will overtake a sense of the irreversibility of any losses, it, growing, will increase in size. Pictures symbolize the lifestyle of the peasants – the working people. Their slave labor, endless cares and torments from a hard life are what these canvases depict. Malevich impersonal his heroes, shows their mass character, sameness, insignificance and pettiness of human life.

It expresses uniqueness not by features of a face, but by forms and a variety of color scale. Here and space for imagination: for a long time looking at the pictures, figures, faces, roles, actions appear. Thus, each person has his own version of what is happening, what is written on the canvas.

An important feature of the author’s work is that each object, figure, body, body part – drawn separately, stacked on top of each other – this gives the paintings an expressive look.