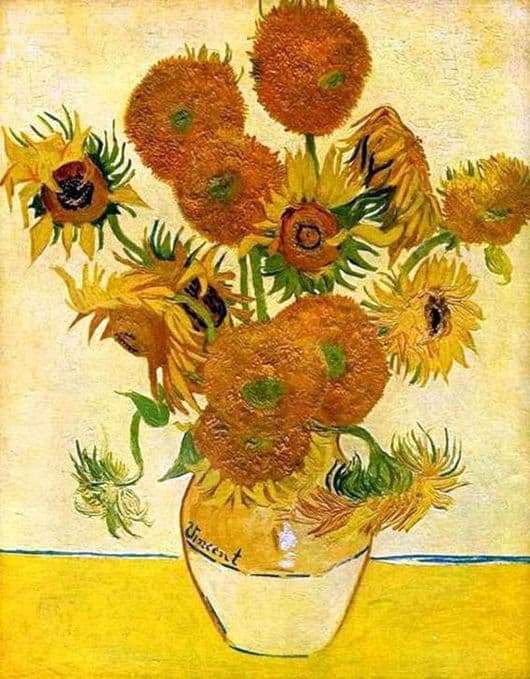 The picture is filled with color and life. But many connoisseurs of art, many critics will come to the conclusion that everything is too “burning” with color. Saturated orange and bright yellow color is a sign of mental disorder, many pictures of this artist speak about it.

The picture does not have a clear idea about sunflowers, everything seems to be mixed, glued and chaotic.

Sometimes the artist admitted that the pictures, or rather what was depicted on them, are not a figment of his imagination, it is not a reality that surrounds us, but whispering demons, and in order to somehow stop these voices in the head, he tried to do whatever they wanted.

As if the sunflowers, the hundred-headed snakes, look at you, drawing you into your own, magical and disorderly world, you just want to take and fix their position in the vase. Although plainly and vase is not shown here, some kind of earthen jar. On the one hand, the nauseous picture is simple and monotonous, but on the other, it is so emotional that this bright yellow color eats up your mind.

It attracts the attention of the red spot, similar to the core of the head of a sunflower. In the whole picture there are no sharp transitions of color and here, saturated red. As if reality is breaking free from the monotonous state of affairs in the artist’s head.

“Sunflowers” is a kind of “delusional” cycle of paintings with the image of sunflower flowers. In his work on these cycles, the artist applied the impasto technique, which in itself carries such a property as applying a thick layer of paint with the help of not only brushes, but also an ordinary knife.

Thus, the surface turns rough, as if you can feel all the subtleties of the image. The relief pattern makes it more real.