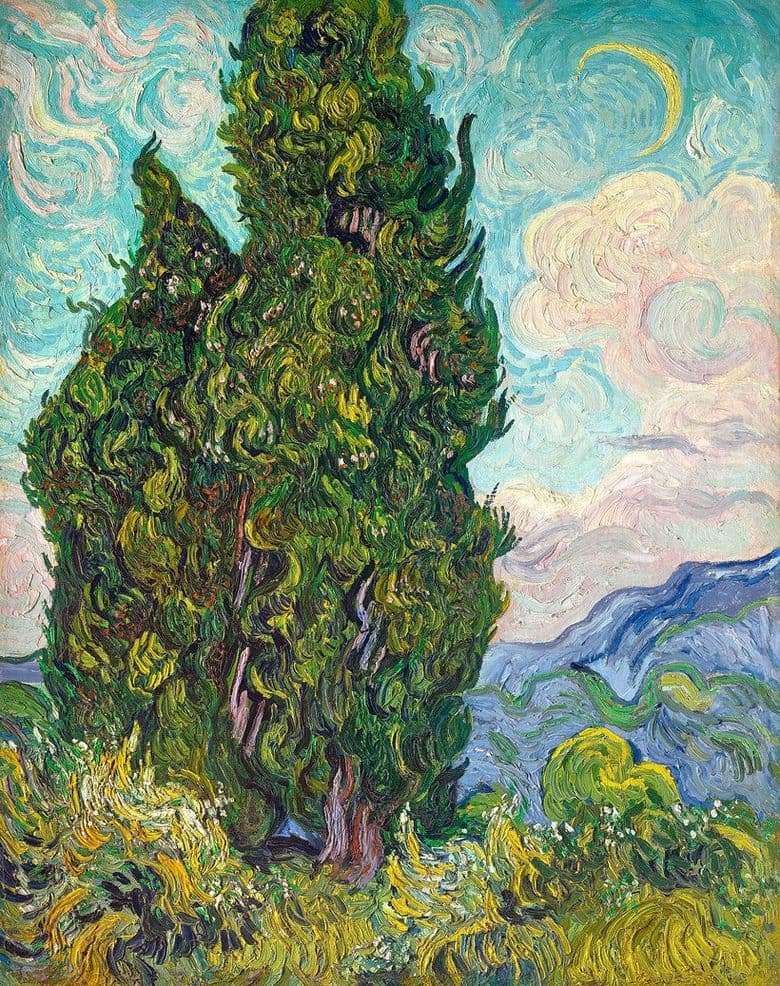 It is no secret that the famous Dutch artist was tormented by bouts of madness. After one of these attacks in 1889, Van Gogh went to a hospital for mental patients in Saint-Remy, where he was free to draw.

This period in the life of Van Gogh significantly influenced his work and outlook on life. It was in the hospital that the artist became fascinated with cypresses. These trees, which grew mainly in cemeteries, were associated with the theme of death, which became close to the artist. He compared the trees of sorrow with beautiful and proportional Egyptian obelisks. In 1889, the painting “Cypress trees” was painted in oil on canvas.

The central place in the picture is occupied by two slender cypress. They are so tall that it seems as if the artist did not have enough canvas to depict trees to their full height. At the roots of the trees you can see flowering grass, and in the background – gray-gray mountains, blue sky, white fluffy clouds and the moon. Tree silhouettes are the only vertical elements in this horizontal landscape.

The artist depicted cypress trees as no one did before him. The overlay of paint in several layers creates the effect of illuminating dark crowns of trees with golden sunshine. In this picture one can feel the dynamics and nervous tension. Van Gogh painted the paint with spiral movements, creating the impression of a twist and association with the flame that ascends towards the sky. It seems that slender trees are shaking and bending under strong gusts of wind as an echo of vibration, shaking the artist’s body at the time of the next attack.