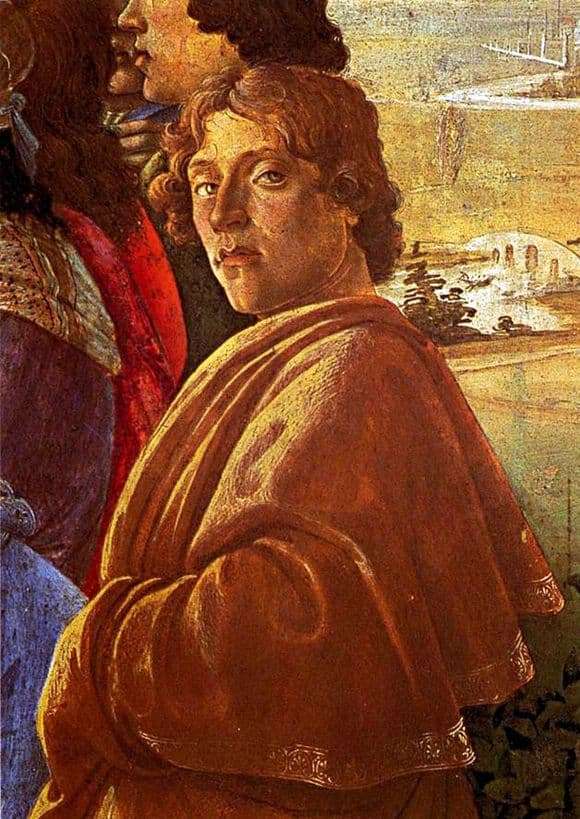 Botticelli is rightfully one of the most prominent representatives of the Renaissance. The original style of the master, was received from his teacher, which is largely determined solely in color, his own type of face and attention to detail.

On the example of “Self-portrait”, it is clearly seen how the formation of a personal style occurs. It becomes more powerful in terms of understanding not only graphics, but volumes as a whole. We would like to pay special attention to the work with energetic ocher shadows.

This technique is done in order to convey the natural flesh color, and later, it becomes its characteristic feature. All these qualitative changes are manifested in this picture in a more pronounced form than in the previous ones.

Among other things, it is impossible not to note how Botticelli became capacious and natural to convey reality in his canvases. His painting has become more narrative. Now here the dynamics and expression are intertwined in the most successful way, together with complete clarity, which tell the viewer the full, and the real drama of the plot conceived.

You can also note the beginnings of the already begun changes in the palette, gradually moving from their usual pale colors to more saturated.

When writing this picture, the main idea was dominated by the moment itself, which was conceived in an ideal way. The game with ocher is manifested not only on the faces of the canvas, but also on the clothes of the main character of the canvas. Each fold of his attire, very high quality traced relative to the game of the shadow.

Even visible ornament on the edge of clothing, which is often found on Roman and Greek clothes, thereby making it clear who is in front of us. The background, in turn, is saturated with pale tones in order to add to the main character even more color.