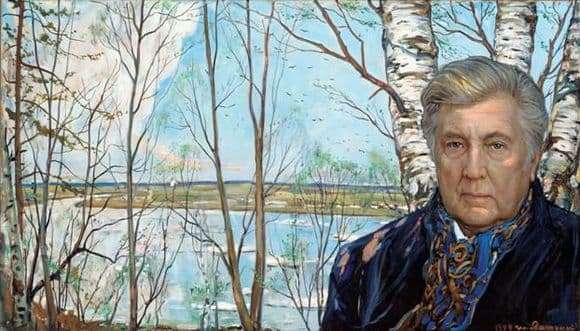 Soviet and Russian portrait painter, public figure, awarded many awards, including “For services to the Fatherland.” In 1999, he received a UNESCO gold medal for his contribution to culture and wrote a lyrical self-portrait, which is otherwise called “And again spring.” On it, as in the photo, Glazunov himself and nature awakening behind him are depicted. Season, depicted in oil on canvas, leaves no doubt – this is the beginning of spring.

The most beautiful time of the year, its beginning. Behind the artist is a river, along which rare ice floes are still floating. It reflects the color of the sky – blue with white floes, which resemble clouds. For a minute it may seem that this sky has fallen down and winds behind the character. She walks away, wriggling like a young snake. And somewhere on the horizon depicts the elevations of a dark blue, juicy color, in which you want to peer.

Near the artist himself depicts birch and other trees. All of them are just starting to wake up after a winter sleep, some of them already have the first green leaves, probably still sticky and smelling in the spring. The greens that appeared on the branches resemble a weightless green cloud. And somewhere in the high light sky the heralds of spring are already flying – birds that have already returned from the south to their native lands. The artist himself in the portrait is no longer young, but his eyes are of a clear color and are looking straight at him, the gray hair that appears does not make him any older than he is. He is not smiling, but calm. Ornate neckerchief looks very harmonious against a blue jacket.