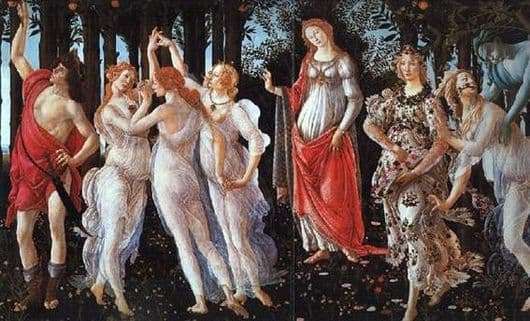 In the painting “Spring” three directions inseparable from each other have found their place. These are the directions in the style of which science, philosophy and art developed. Courtly, pompous style, often in this style at that time beloveds were depicted.

Antique style in the picture are motifs from the myths of ancient Greece, as well as their characters. The Christian style is represented by the image of the Madonna, who allegedly blesses everyone with her hand.

On the right is the west wind – Zephyr, which abducts the Greek nymph Chloris, the mistress of fields and flowers. In the left part you will find three graces, which by their presence personify chastity, pleasure and love in unity. Mercury immerses the viewer in the memories of the myths about Paris, who gave the apple to the goddess. The Greeks had this goddess Aphrodite, and the Romans had Venus. In the picture she gently walks through the herbs and flowers. and above the head of the goddess is a small cupid, who is aiming at one of the graces.

Madonna is depicted for a reason. After all, she, like other goddesses, was sent down to the ranks of saints and for Christians she is a goddess. For the artist, she is the image of an ideal woman and “beautiful lady”, the image of which inspires both artists and poets.

In the picture, the artist makes it clear that different epochs of art do not differ significantly from each other, they are simply gradually transformed into new images and heroes of myths and legends. Not paying attention to the fact that Christianity and the pagan faith were mixed in the picture, the artist stubbornly upholds the right to the existence of various trends and views.

The picture is striking in its harmony and peacefulness, warmth and streams of love, as if indeed cupids send their arrows to the hearts of those who treat art with warmth and attention. I want to study every corner and curl for a long time and tirelessly, I want to become a part of it.