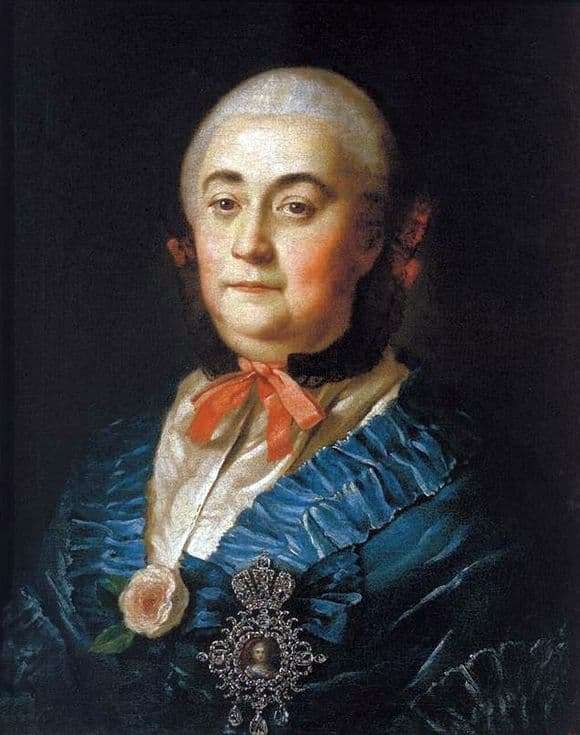 “Portrait of A. M. Izmayilova” was written at the turning point of the development of Alexey Antropov’s mastery and recognition of him as one of the most original and brightest artists of his era. This picture clearly demonstrates the evolution of the creative worldview of Antropov after his training with the famous Italian painter Pietro Rotary.

Moreover, the portrait is made in a chamber style, when the model is not depicted in full growth and on a neutral background. A. P. Antropov does not forget about the details indicating the status privileges of the character, but goes beyond the limits inherent in the same traditional chamber variant. Attention is paid to facial expressions, details in clothes… At the same time, Antropov strives to preserve the realistic character of the depicted heroine, subtly conveying the essence of her nature. The portrait has a bright color and contrast of color variations. And the smallest details in clothes are carefully thought out and natural.

The woman depicted in the picture is Anastasia Mikhailovna, the daughter of Naryshkin is the chamberlain of the great Tsar Peter, in Izmailov marriage. Possessing a sharp mind and striving for power, she entered the closest retinue of Empress Elizabeth and had the status of a high-ranking person. The kindly nature of the issue echidno squeezed in a thin line of the lips and expressive look brown eyes. However, like any woman, Anastasia Mikhailovna, first of all, seeks to perpetuate her beauty in the memory of her descendants. What is not easy, because at the time of writing a portrait of this respectable person was already about 56 years.

The inexorable desire and desire of the ladies to remain irresistible, the artist deliberately turns inside out. He does not hide already rather heavy and blurred figure of a woman. The massiveness of the body emphasizes the luxurious dress of a rich blue color, with numerous ruffles. Red bow unwittingly focuses on a double chin. Do not hide the wilting of the once famous for its beauty Anastasia Izmailov and cosmetic tricks of the past era: a tight face, an extra layer of blush on the cheeks, powdered hair and thickly painted eyebrows.

The weight of the figure of the favorite of Elizabeth Petrovna gives the order studded with diamonds with her image. This decoration is highlighted, indicating the high social status of the model and its significance. The Order is a reward and a special sign of the Empress’s personal disposition to the member of her suite. Worked to the smallest facets of each of the diamonds, this detail of the attire catches the eye, forcing you to admire the transfer of the brilliance and magnificence of jewelry with the help of painting.

Thus, although A. P. Antropov does not try to reveal the inner world of Anastasia Izmailova, she skillfully and succinctly identifies and displays the most significant and striking features of her character.