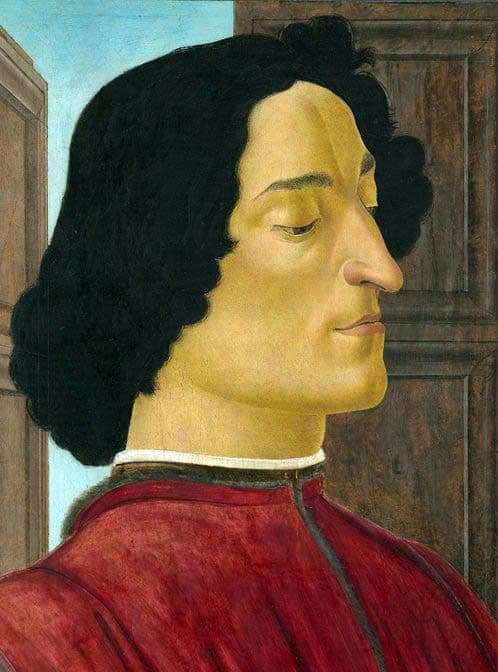 The great Italian artist of the Renaissance perpetuated the Prince of Youth in many of his paintings, which were striking in their beauty. Giuliano Medici attracted the attention of many artists, poets, who mentioned him in his works as a noble knight, popular with the population. In the painting by Botticelli, Giuliano appears as a dark-haired, sophisticated young man, in whose eyes genuine brilliance and calm.

This state of the young man is explained by the fact that he was not burdened with public affairs and he just indulged in entertainment and tournaments. Giuliano had a talent and inner attractiveness that helped him endear himself to any person. And this is how his inner beauty and strength were seen by many artists, including Botticeli, who decided to convey the beautiful image of a young man.

Giuliano Medici, being a favorite of the population, attracted the attention and hatred of top officials. It was his personal hatred for him that caused the plot in which he was killed. The Medici forever remained in the memory of the Italian people, the Prince of Youth and an extraordinary knight. Giuliano Medici became the embodiment of the golden time in Italy, and that is why the inhabitants mourned his death bitterly. The portrait, which will not leave anyone indifferent, has become a real masterpiece and work of the great Italian artist.