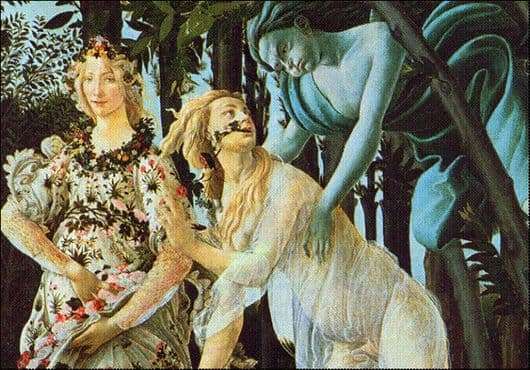 “Flora” is a fragment of the famous canvas called “Spring”, which was created by Botticelli in 1482. The source of inspiration for the painter was the works of Roman literature – the poems of Titus Lucretia and Ovid. According to the artist, the picture depicts a glade.

On the right, it houses the god of wind Zephyr (next to it are trees without fruits), pursued by them Chloride and Flora, the goddess of flowers. Then Venus stands alone, above which Cupid hovers, and on the left side of the picture are the Harits, Aglaia, Eufrosina, and Talia.

Goddess Flora is the eternal symbol of fertility. That is why in the picture of her image is particularly colorful and brilliant. In the wreath of Flora you can see more than forty species of plants and flowers, among which are lilies of the valley, violets, daisies and many others. Such an observation disproves the once-common opinion that Botticelli depicted plants in a schematic manner.

Of course, he was far from accurate, scientific observation of Leonardo da Vinci, but he did not follow the conventional principles of writing, so characteristic of the Proto-Renaissance. Especially well the artist managed the roses – warm reddish color, luxurious and ephemeral. And the cornflowers together with the daisies under the brush of a talented artist began to resemble stars.

Weaving flowers into Flora’s wreath, combining them with berries and fruits, Botticelli did a job of almost jewelery complexity. Worthy is the very image of the goddess, which is fully consistent with the ideas about it.

Art critics have repeatedly noted the role of symbolism in the canvas. So, if you look at the heroes of the picture, you can see in them a repetition of the rhythm of 3-1. The image of Flora’s flowers is also symbolic. So, carnations and some other flowers refer to earthly, carnal love. To some extent they are contrasted with lilies and carnations, indicating elevated, unearthly feelings.