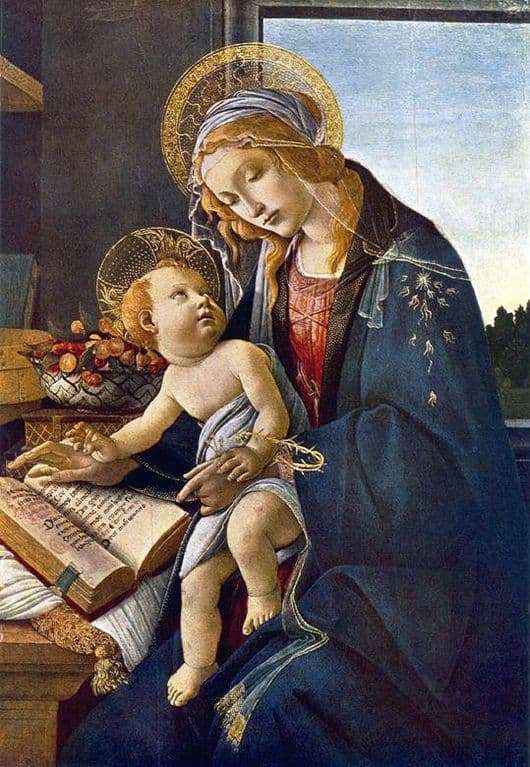 The Madonna and the Book is one of the most famous works of Sandro Botticelli, a contemporary of Leonardo da Vinci and Raphael Santi, who remained on a par with the centuries.

Throughout his creative career, Botticelli created various images of the Madonnas. The paintings were attended by people and angels, a different background and a general atmosphere. The picture “Madonna with a book” stands out from the total.

Scientists have established that the book is called the “Hour Book of Mary.” In this way, the artist talks about the authority of the church and its teachings.

There are other traditional symbols in the portrait. A crown of thorns and a few nails in the hands of a baby symbolize future suffering. Cherries, placed next to the Horology, speak of a promised paradise, accessible only to believers.

The images that the artist created in the 1480s, much more difficult than the early paintings. Here are unusual emotions – sadness, insecurity. The baby in these paintings is depicted already with nails and a crown of thorns, symbols of future Passions and sacrifice.

The appearance of the Madonna is the ideal of the beauty of the artist. Graceful and clear features, fair skin, the whole figure breathes innocence and purity.

Infant posture is both trust and instability. He is half-sitting on the lap of his mother and it seems that he is not very comfortable. He turned and looked at Maria. But she is full of sad thoughtfulness.

Botticelli of this period is a fairly mature artist with students.