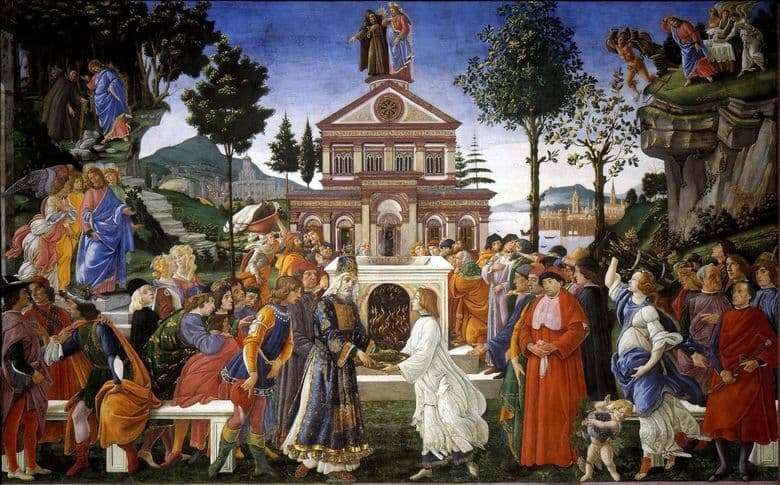 In 1481, Pope Sixtus IV invited Botticelli, as well as other outstanding Florentine and Umbrian artists such as Pietro Perugino, Domenico Ghirlandaio and Cosimo Rosselli, later added to them Luca Signorelli and Bartolomeo della Gatta. They were assigned the task of making murals on the walls of the Sistine Chapel.

It was supposed to draw two walls facing each other, comparing the lives of Moses and Christ. In order to do the work, the artists had to use the same scale of sizes, the same rhythmic structure and landscape representation, a single chromatic range with gold decorations that made the paintings shine with the light of torches and candles.

Although Giorgio Vasari claimed that Sandro Botticelli painted the entire set of frescoes, historians are convinced that he wrote only three stories. In addition, it is believed that he provided sketch drawings for eleven stories and actively helped other artists in writing many others.

The fresco compositions are complex, they include Neoplatonic rethinking of classical themes in Christian iconography. The figures painted by Botticelli are sculptural. Since this was intended to decorate papal possessions, one might think that many of those portrayed are prelates and relatives of the pope, since persons do not follow the same model, they are individualized portraits.