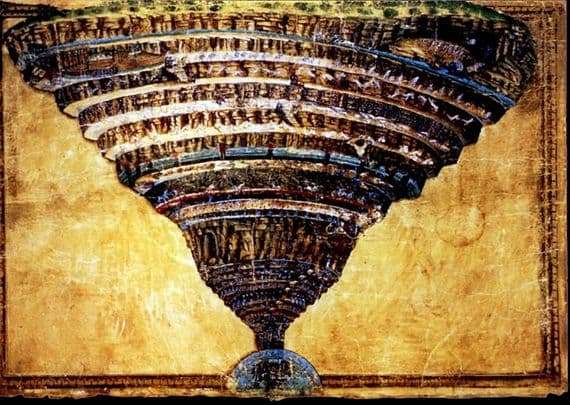 One of the most famous works of Alessandro Botticelli was written by the author at the peak of fame in 1480. The picture has a more complete name, namely “The Abyss of Hell” and is one of the illustrations of Dante’s The Divine Comedy. The history of writing a picture is quite interesting and remarkable.

After the Botticelli, at the invitation of the Pope went to Rome, in his paintings, he earned a lot of money. Razgulnaya, easy and irresponsible life of the artist led him to poverty. After which he had to return to his homeland. Pondering his lifestyle, Alessandro literally read out the works of his contemporary Dante Alighieri. The painting “Hell” is an illustration of the work of Dante, the artist devoted many years to this work.

The picture is a kind of hell map. The artist, in the work on his work, accurately follows the description of this place in the “Divine Comedy”. Dante, with the accuracy of a poetic word, reflected a certain topography of hell, and also described the torments and sins of its inhabitants. Following the description of the poet – 9 circles make up hell. The River Acheron flows along the perimeter of the first circle, the tributaries of this river flow into the swamp of Stygia, which is located on the fifth circle, where people are being punished for excessive anger. Following to the ninth circle, where the traitors are serving the punishment, the river flows to the center of the earth in the form of a waterfall and turns into ice.

According to Dante’s description, the further the circle is, the more terrible the sin created by man is. According to the author of the Divine Comedy, a man carries the most terrible punishment for treason in the 9th circle of the netherworld. Botticelli exactly followed the description of the poet and depicted hell in the form of a funnel, tapering to the center of the earth, where Lucifer spends his imprisonment.

The picture is allegorical in nature and is rightfully a world masterpiece.