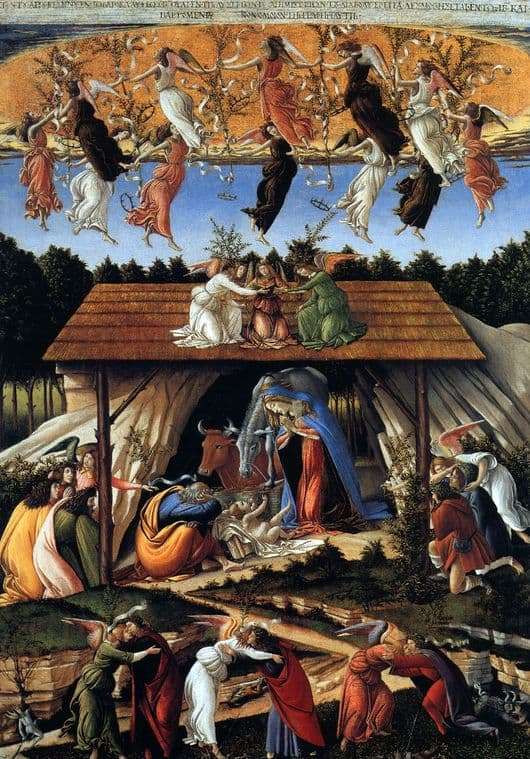 The theme of the Nativity of Christ was constantly dominated by different artists at different times. But each of them had a completely different vision of this event. So Botticelli, it is very peculiar. It seems to be all the same, everything is familiar to us, but the artist uses a bit of another – mystics.

The thing is that this canvas was written in 1500, that is, just at the time when many predicted the end of the world. This has actually become fashionable a long time ago: as soon as a new century arrives, the prophecies of the imminent destruction of the Universe immediately begin. And just then Botticelli wrote this canvas, his penultimate canvas.

Let’s take a look. Yes, it does not look like the traditional interpretation of the well-known Christmas scene. Although the main artist left unchanged: the baby in the manger, the mother and father are nearby. Even the animals remained in place, but everything else. See how many angels are around! Angels on earth who show shepherds to the Holy Family, the angels in the foreground of the canvas, who kiss and embrace in joy all with the same sages. And of course, the angels who dance in a circle in the sky.

Note that the angels in the hands of the olive, it is the branches of the world. Botticelli did not forget about the devil: down in both corners in the little devil, who seem to be hiding in the crevices of the earth and, as it were, watching what is happening.

Particular attention is caused by three angels sitting on the roof. They are also in the hands of the olive, but you should pay attention to the color of their clothes. After all, no wonder they are dressed in different colors. And that’s really not in vain. Green, red, white – grace, truth and justice. So here there is a symbolism. Cloth right stuffed with symbolism. Yes, and the olive is also not in vain in the hands, it in the times of Botticelli was decorated with temples.