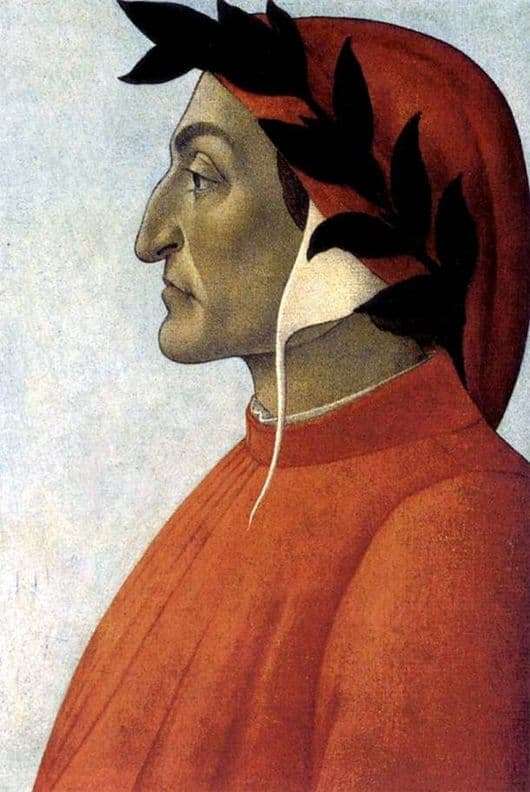 In the works of the Italian artist of the period of the 80s of the 15th century, there is a clear interest in the figure of Dante. Appeal to the incarnation of the famous poet, author of the immortal “Divine Comedy.” the painter seeks to reconsider his views after the Pope’s fun and slightly dissolute life.

Sandro consistently illustrates all three parts of the work, carefully following the content of the text. Most art critics agree that the portrait of the poet belongs to Botticelli, thus continuing the theme of Dante in the artist. Although this is a rather controversial issue: there is an assumption that this picture could also have been created by one of the pupils of the Italian master.

The portrait of Dante fits well into Sandro’s work, primarily with his manner of accurately reproducing the smallest shades of a person’s psychological state. The features of his face in the portrait convey tranquility, confidence, greatness and light melancholy. Botticelli seemed to want to emphasize that we are an extraordinary, great, famous person. This is facilitated by the symbolic meaning of the details accompanying the face of Dante.

For example, a laurel wreath refers to his literary achievements, the glory of the first Renaissance poet and creator of the modern Italian language. The choice of image quality profile Dante is dictated, most likely, by associations with coins and imprinted on them great figures. But the poet’s red clothes have similarities with the monastic attire, thus emphasizing Dante’s modesty and asceticism – features that are especially significant for Botticelli’s spiritual quest.

From under the red cloth covering the head of the poet, one can see the edge of a white cap, symbolizing, according to Sandro, the spiritual purity and self-irony, which no truly great person is deprived of.