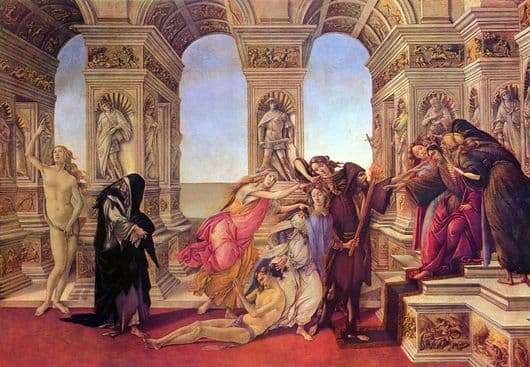 If you listen to the statements of George Vasari, then the culprit of the picture, written by Sandro Botticelli, was his friend Antonio Senya, who advised to recreate the lost images.

The plot of the work was the lost work of the Greek artist Appeles. This work can not be hung just on the wall. She needs to be admired as a jewel.

In the original, Apeles, who was a court painter, is accused of treason. Allegedly, he betrayed the Egyptian king Ptolemy IV. After it was in memory of the terrible dungeons of the prison, in order to somehow restore himself from injustice, the Greek artist painted a picture of Slander. And Botticelli created a remake for this picture.

In the picture is a throne with a sitting king Midas with donkey ears that Apollo endowed him because of the unfair announcement of the winner. In fact, in the competition he won, the king awarded the victory to another. So he was offended.

On either side of the king are images of suspicion and ignorance. They whisper something into the king’s ears, and he listens to them carefully, with his eyes closed. And at the same time, he asks for an ugly man in a black robe called Anger, who extended his left hand to the king.

Malice drags to the king of slander. King Midas listens to any Slander, because he rules the thoughts of the King of Malice. Slander’s hair has captured two characters and is trying to braid her braids. These two characters are Envy and Falsehood. Externally beautiful, but deceitful, they want the symbols of beauty: white ribbons and roses to identify themselves with cleanliness.

Meanwhile, Slander clutched a deadly grip on the deceived, naked in order to understand it, and begging for sacrifice in the image of a young man. But all in vain. On the left, the artist depicted a naked figure named Truth, the recognition of which is given only to Repentance, and to the old woman – the mourner.

In fact, this picture has remained a mystery for many generations. No one knows the true reason for writing this picture by the master.