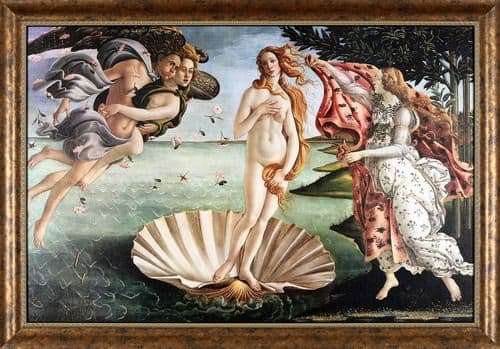 This picture is in the Uffizi Gallery, in Florence. The painting was painted around 1484 in oil on canvas. The famous painting of the painter from Florence Sandro Botticelli “The Birth of Venus” is a masterpiece of the Renaissance. An open space, the sea and the sky appear before the audience, the artist depicted the early morning, when the darkness of the night had already dispersed and the world saw the beautiful Venus, which had just been born from sea foam. This goddess of Beauty stands on the sea shell, and the god of the wind Zephyr drives her along the waves and helps her to swim to the shore.

The appearance of this goddess on earth is triumphant – roses are flying to her feet, and the goddess Ora gives a young cloak to the young goddess of Beauty to cover her. And the cape is decorated with embroidered delicate flowers. The image of the heroine is represented by a painter with ideally beautiful features in which perfection and harmony are striking. The face of the goddess, as if covered with a shadow of sadness, meekness, falls on her shoulders the long locks of beautiful golden hair that the wind develops. In the picture there is a clear and precise composition. The pose in which the goddess appears before us resembles the pose of an antique statue of Venus Pudick (from the Latin “chaste, modest, shy”), which we also know as the statue of Venus de Medici. “Isn’t it strange that 50 years ago Botticelli was considered a” dark “transitional artist who came in the world only to prepare the way for Raphael,” wrote the famous art historian Pavel Muratov in “Images of Italy”.

It seemed strange to P. Muratov at the beginning of the 20th century, it seems even less clear to us: we see the genius of Botticelli, and we cannot even imagine that for almost three centuries, somewhere from the middle of the 16th century to the middle of the 19th century., the world remained indifferent to Botticelli’s masterpieces. But it’s true. Botticelli (1445-1510) lived in the same era with Leonardo da Vinci, he saw how the statue of David was installed in Florence, which was the work of young Michelangelo, he died only ten years before Raphael, but there was a whole era between these masters and him.