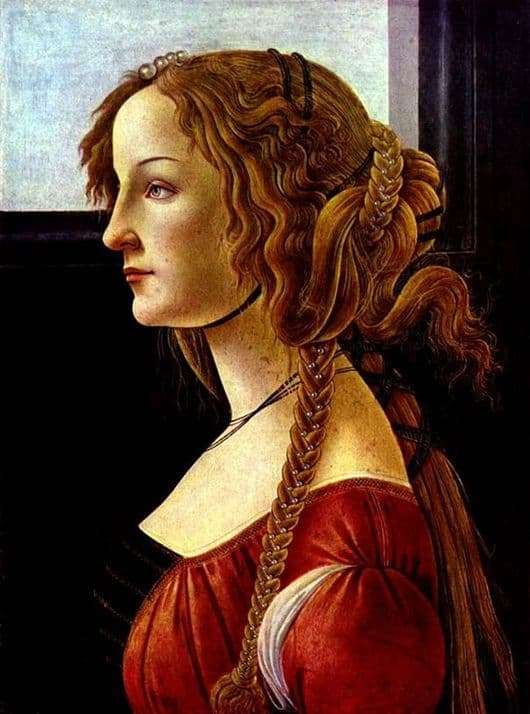 Sandro Botticelli is a great Renaissance artist who wrote dozens of beautiful paintings, among which were many portraits, but none of them are as beautiful as the portrait of Simonetta Vespucci of the first beautiful woman in Italy, who had just an extreme number of admirers, among whom were the richest and most influential people. , including Dodge, Cardinals and even Dads.

Not only was this girl very beautiful, she also possessed an unsurpassed mind, knew all the secular rules and was an excellent diplomat. Knightly tournaments and even battles that had a bloody outcome were held in her honor.

Bottichcheli painted a portrait apparently from the original somewhere between 1474 and 1475, not later, because already in 1476 the beautiful senorita died from consumption. She was at that time about 23 years old, that is, the portrait depicts a 21-22-year-old beauty in the full bloom of her still unclouded beauty.

Simonetta is depicted sideways to the viewer, which emphasizes the nobility of her profile and the fullness of a beautiful lush chest, according to the custom of that time, barely covered with a corset. Most likely this is one of the latest images of the woman. The girl’s hair was tied off the back of her head, but some of them were disheveled and unyieldingly pulled out from under the hairpins and even a tight braided braid entwined around a long taut rubber band.

Thin eyebrows, straight look fixed into the distance, full of beautifully curved swan neck, small nose and small lips – these are the features of the face that were dreamed of by dozens of admirers of the second half of the XVI century. Simonetta at the time of writing the picture is caught in a tense pose against the background of a lighted window niche, which further emphasizes its natural beauty. Experts in the field of art believe that Simonetta became the muse of the artist for several years and it was from her that the best of his paintings were written.