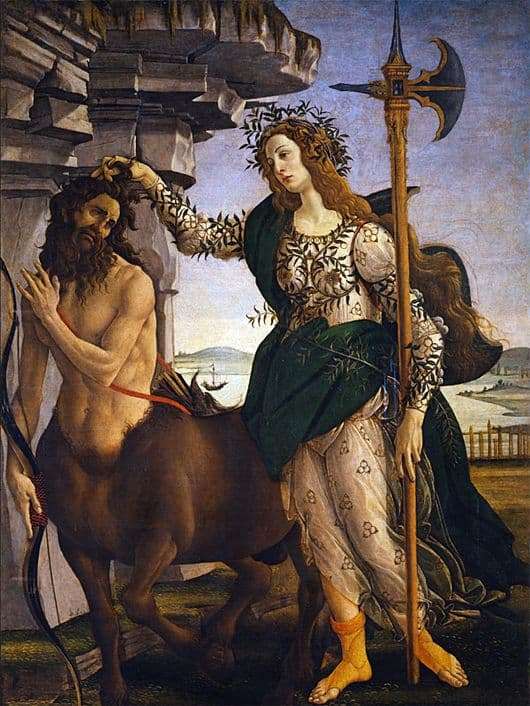 The artist painted the famous pictorial canvas by Sandro Botticelli “Pallada and Centaur” by order of Lorenzo Medici. The fundamental idea of the painter is the idea of the philosopher Ficino that human nature is dual and unites the animal, which is connected with the existence of the body, and the human mind, which seeks to comprehend wisdom.

Thus, the Centaur on the Botticelli canvas is a combination of low and high impulses. After all, the bow and arrow symbolize animal features, and the artist gives the painter’s expression to the face of the Centaur, which resembles the images of saints.

The canvas has a neoplatonic overtones. This is well demonstrated by the landscape, where dark cliffs and amazing distances are visible overnight. The artist, in fact, this distance, is the background. On it emerges a centaur, as well as the figure of a woman holding a halberd. Her dress, the master of the brush, painted with such picturesque colors that it reminds us of Spring. A woman’s face is thoughtful: the eyes are open, as it were, but the gaze does not look forward, but into itself somewhere. Athena holds the centaur’s curls with her fingers, and this confuses him a little.

In all the mystery and the concept of eternity. Athena appears before us not as a warrior woman in a helmet and with a shield, which was a participant in the battle of the Lapith against the centaurs, but a true winner, on the face of which there is some kind of detached sympathy.

The goddess, in whose hands is not a spear, but a halberd embodies the moral qualities of man. The allegory of the picture is very clear: spirituality, culture and wisdom must always rise above the animal principle. This episode of antiquity is relevant at all times.