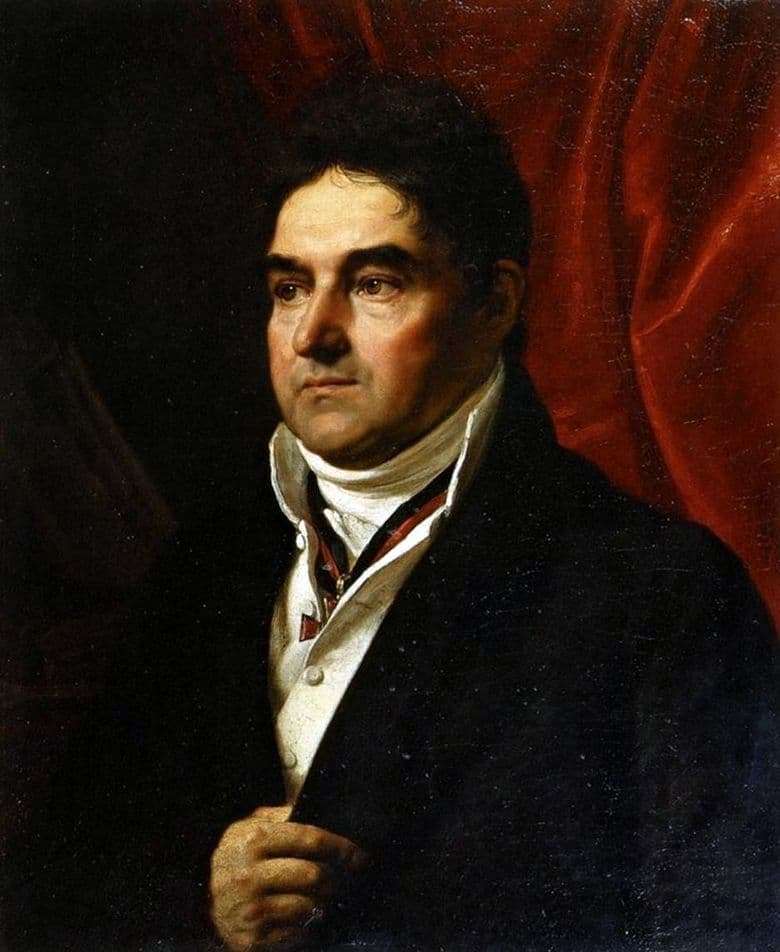 The canvas is a traditional chamber portrait, characteristic of the XVIII century. The senator and the writer is shown by a private person – without awards or distinctions, in ordinary clothes. In reading the image there is no drama and tension of character inherent in the canvases of painters of the past.

The most dispassionate, balanced interpretation of the hero’s image, a proven composition characteristic of classicism, a subtlely demanding coloring of the picture confirm the character of the character of the new era. The tails are absorbed in themselves, which does not surprise anyone: idealists are usually staunch individualists who consider disunity a normal state.

The artist model lives on the canvas. The combination of light and shadow illuminates the inner world of the character, changing right on the canvas in front of the spectators. The background of the portrait is a velvet drapery of a brick shade, illuminated on the right side, and turning to the left into a black shadow, this gives an infinity effect. The figure itself Khvostova through such a technique as if immersed in the infinity of space. The coloring of the picture sharpens the impression. Light spots are only the face, shirt and hand of the senator.

The face of the hero, framed with black hair, is written in warm flesh tones, with a blush appearing on his cheeks and a slight unshavenness. Portrait of the portrait is underlined by the half-turn of the body and its bosom image. Curved thick eyebrows above pensive, light-brown eyes staring into the distance, tightly compressed lips, large elongated nose. It is no coincidence that the position of the hand holding over the side of the coat is written. This important detail adds another extra touch to the character of the hero.

Kiprensky has a tradition of writing pair portraits. Here and the canvas with the image of the tail also has a couple – a portrait of his wife.

On the canvas in the face of the hero reflected the imprint of his soul. The sublime pathos is felt in the spiritual energy with which the character is endowed. The portrait clearly tangibly elegiac mood, sad experiences, separated from the insignificant routine. The master portrays a person as artlessly as possible – just as he is alone with himself.