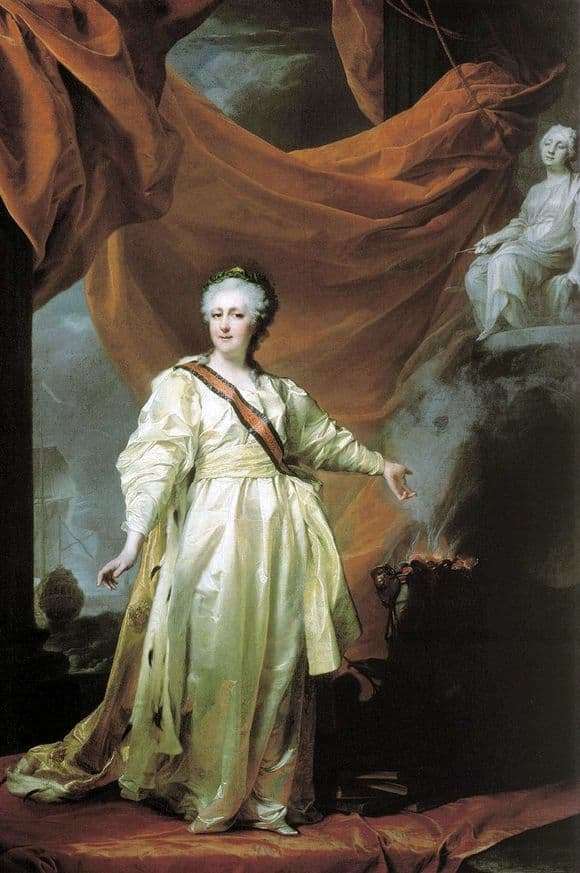 Levitsky painted a picture in 1783.

The viewer can present the features of the portrait in the period of classicism. We can understand the features of art, its symbolism and allegory. Catherine is in the temple of the goddess of justice itself. She burns poppy flowers on a special altar. Instead of a crown on the head of the Empress, a laurel crown. Order of St. Vladimir says. That Catherine did a lot for the country. This is also evidenced by the books that lie at her feet. It is truth.

In this grand portrait, the main features of classicism were clearly revealed. First of all, these are very saturated colors. Cold tones prevail here. You can feel the division into several plans in space. Forms are sculptural. They are the most restrained and plastic at the same time. The artist skillfully uses the techniques of allegory. We see Catherine in white satin clothing.

Before us is a real woman of ancient times. She moves smoothly, and smiles very friendly. That should be the head of a strong country. Certain details were used to create a majestic effect: the carpet is slightly shifted, the pale yellow satin shimmers, and the luxurious mantle of ermine is visible.

Levitsky created an image that most idealized Catherine. In it, he laid the idea that the monarch reigns only for the people and he lives according to the laws that exist in the state.

The content of the picture is non-portrayed. This brings it closer to the historical canvases of the time. This portrait is allegorical. In order to depict the real sovereign, confirmation was needed in the form of allegories and symbols. Levitsky sought to authenticity.

Before us is not just a portrait, but an idea. The artist gives a peculiar order to the empress. That is how the noble intelligentsia imagined the monarchical power in its ideal form.