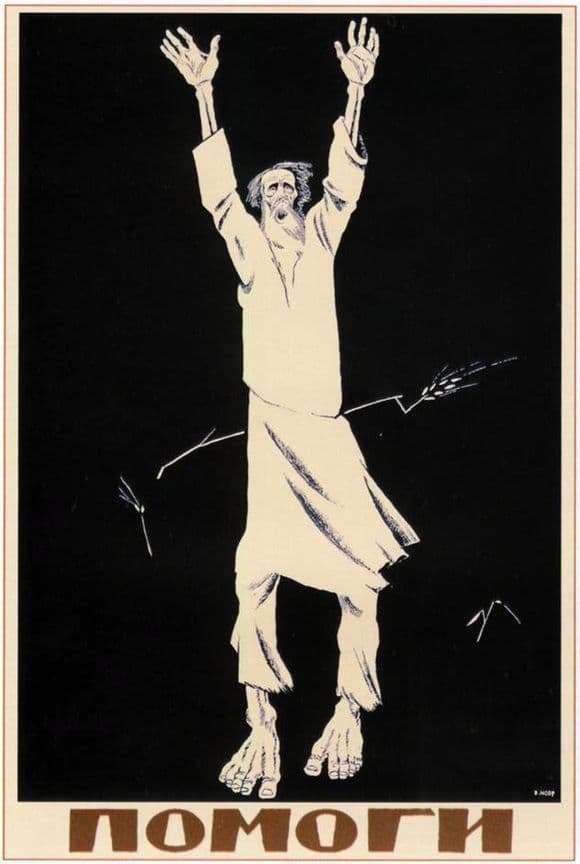 Moor is the pseudonym of Orlov Dmitri Stakhievich, a Russian artist and art and master of graphics. “Help” – one of the previously known campaign posters, created in 1921. As the author himself said: “In order to prevent assistance to starving people, class enemies made every effort. The poster was conceived with the aim of awakening the unconscious elements of the population.”

And indeed, the old man, withered, lean, broken by hunger, pierced through with an ear of wheat, made the desired impression. The image was more eloquent than any literary legends. In this spikelet, all are the sun-dried barren fields, the children dying of hunger, the tears of mothers. No wonder the author portrayed the peasant precisely white on a black background – it is a symbol of dying life in the midst of eternal darkness. And behind is another wheat spike.

The old man is so tall and emaciated that the skin sticks to the bones. Hands and feet are sinewy, exhausted by eternal overwork and almost no longer capable of anything. The man is depicted in old, ragged clothes – people are in poverty, they are freezing, trying to survive as much as they can. The image causing a storm of emotions no longer needs any additions.

Campaign posters are a multitasking phenomenon. Besides the fact that they provoke the feelings of each person individually, they also create some urges to action, thereby uniting the people against their common misfortune.

The various inscriptions accompanying the image briefly interpret the essence of the problem. “Help” is an obvious call for help, a request for food, the ability to live another day longer. This meek phrase in the heads of the people sounds in a languid, tortured voice of those who need food, prompting them to come to the aid of the unfortunate and feed them with bread, fill their stomachs, overcome the problem of hunger once and for all.