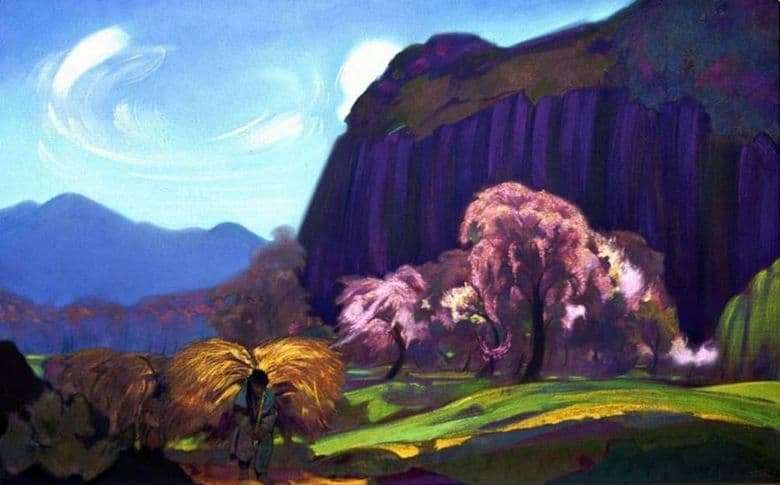 Svyatoslav Roerich – the son of the artist Nicholas Roerich, began to paint and sculpt from the earliest years. His mother, Elena, in every way encouraged her son’s aspiration for artistic creativity, collected drawing books for him, bought stuffed birds and insect collections for still lifes, collected multicolored stones. As a child, Svyatoslav was an assistant of his father – he stretched canvas and mixed paints in the process. At nineteen, the young artist first appeared in India, the exotic beauty of which struck him to the very heart. Eight years later, Roerich Jr. moved to this country, which he later sang in all his canvases. Svyatoslav also married an Indian woman, the famous actress Devike Rani, who became his permanent muse. The artist put a lot of effort into maintaining cultural ties between India and the USSR.

Creativity Svyatoslav Roerich is inextricably linked with India. The vast majority of works are Indian landscapes, portraits are also made in the style of Indian culture. Creativity Roerich Jr. is considered to be “spiritual” – this person as a person in all his works dominates the earth. The artist’s works are unique in color – he used mostly bright, radiant colors. His landscapes burn with tropical heat, evoking direct associations with the characteristic Indian love for bright, rich shades of clothing. In some of his genre works used biblical scenes, but mostly Svyatoslav still gave preference to everyday scenes from the life of ordinary Indian people. Even when the author writes plots, for example, from the life of God Krishna – the mythical hero appears in the pictures as an ordinary person, a shepherd and a musician.

The painting “Landscape”, despite the simple plot, is deeply philosophical, like all the works of the artist. Roerich enters into the landscape view of human figures, bent low under the weight of the burden. Eternal, unchanging work appears in the picture of a sublime, deeply spiritual matter. The golden rays of the sun bright flashes illuminate the bent figures rising up the hill. The picture gives rise to many associations – including the myth of Sisyphus. Yellow-green hills filled with light in the right corner create a feeling of cheerfulness and warmth of the surrounding nature.

A little further – fantasy flowering trees, written out in lilac and pale pink, as if transferred from some fairy tale. Further, in the perspective high in the sky, the purple mountains, cool, majestic, eternal, rise. A high light blue sky with rare white clouds impassively gazes at this picture. Hot, warm colors, soft, iridescent undertones, rich colors – all this together gives rise to a certain melodious movement, expressed by colors and shapes. Roerich simultaneously poeticizes both simple labor and wild, untouched by nature. Deep insight into the essence of Indian culture, typical of the artist, is one of the expressive means of the canvas.