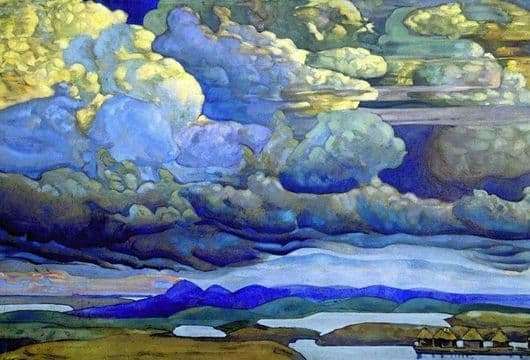 Quite a few pictures of Roerich contain images of clouds. So in this picture they are assigned a large part of the canvas. Their image is transmitted by the artist in magnificent forms of patterns, aerial and voluminous, so dissimilar to each other. At the top of the sky, the clouds are white, they still let the sun’s rays through, and closer to the ground the color turns yellow, transforming into light blue, with breakthroughs of purple ebb, places of brown, reaching dark colors of blue and places of gray.

The lower part of the clouds, which is closer to the ground, in dark color tones, reminiscent of the accumulation of thunderstorm clouds. But in this form they also delight and rivet the eyes of the viewer. In the sky there is no empty space not covered by clouds. Looking at them you feel their strength and power, and at the same time lightness.

It seems that they are growing before our eyes, increasing their volumes and reviving new cloud births. I’d like to hold them in my hands, enjoy their beauty about the airiness. Looking at the clouds, you can imagine, representing various forms of animals sailing through the sky, or perhaps horse riders leading dragons, or even huge ships with highly raised colored sails and other spectator fantasy episodes.

The land beneath the patterned clouds absorbs the colors of the clouds. You will not immediately notice the lake, the hills of the mountains and the houses on the ground, since they are given little space. All attention is focused on the battle in the sky. One can only guess what caused the natural sky battle. Nature’s anger is caused by the behavior of mankind, their negative qualities, anger – to people and to answer for their negative actions. The eternal struggle of two principles – light and dark, heavenly and earthly, eternal and fleeting. In the imaginary subconscious there is a place for unearthly forces, even if it is high in the clouds.