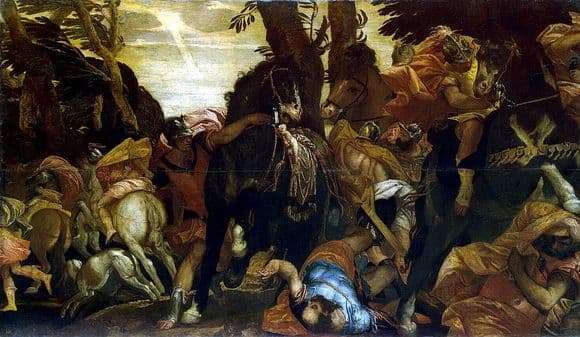 In the visual art of the XVI century – the time of the decline of the Renaissance – the topic of complete spiritual change was very popular. After the hymn of the Renaissance hymn of sensuality and materiality, other times come when it all starts to lose its relevance.

And artists find new ideas for self-expression according to the mood in society. The representative of the Venetian school Paolo Veronese, who turned to perhaps the most popular religious story among painters, the story of Saul, was no exception.

Saul is told in biblical “Acts of the Apostles” – this man not only hated Christians, he tried to fight with them and with the teachings of Christ in all possible ways. Once he went to the city of Damascus, in order to become the head of the persecutors of Christians. But on the road to Saul a ray of divine light descended, blinding him. And then he heard a voice asking what did Saul drive him for? Shocked by all this, the former Saul – the adversary of the Christians – disappears and another Saul comes to replace him – a faithful follower of Jesus, who has since become an apostle Paul.

The center of the composition is the Saul horse that fell to the ground. It seems that the ray from the sky has a powerful force that scattered everything around – the trees are deflected to the side, as if from an explosion, the horses burst from the hands of horsemen and strive away, people run and fall. Saul himself is prostrated on earth, struck by the conversion of God. His body was written in the same perspective, which Michelangelo liked to use in his canvases.

In the picture there is no inherent renaissance clarity, accuracy and deliberate theatricality of the plot – the characters overlap each other, collide with each other, and some of them are written out only partially, as if going beyond the canvas. In this case, the viewer is invited, as it were, to conjecture the entirety of the picture of the picture.

All these techniques were at that time a new word in painting and were a striking contrast to the Renaissance paintings, where all the characters had their places, and the scene was clearly limited to the picture.