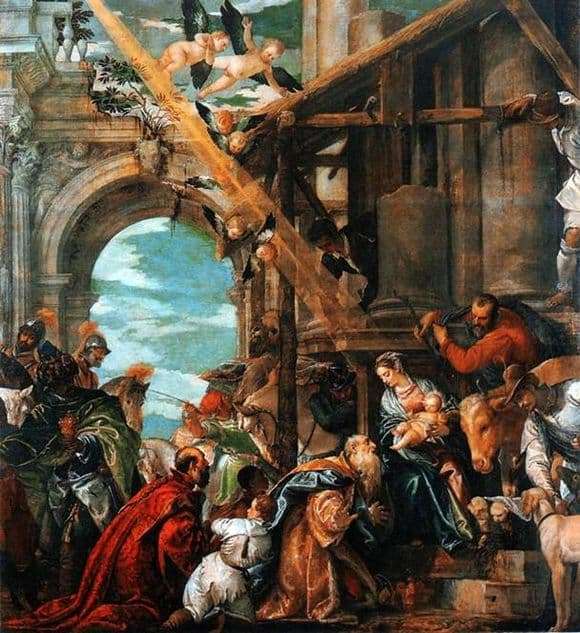 Among the outstanding Venetian artists with interest you have to watch the works of Paolo Veronese. Like other famous masters of the 16th century, he was interested in religious painting. On this extensive and deep topic created the painting “The Adoration of the Magi.” A large canvas with oil paints with a popular biblical storyline was completed by 1573.

“Worship” by Veronese was intended for the Venetian church of San Silvestro. The work is distinguished by the colorful illustrations and multi-figure composition. A common motif depicting the born of Christ in a dilapidated barn is repeated in the painting of the Venetian painter.

Wooden boards of a dilapidated house symbolize the Old Testament. These buildings rest on new antique columns with skillfully carved arches and balustrades. The second architectural structure represents the era of the New Testament, which opens with the birth of Jesus.

composition is filled with many figures of people, animals and angels. Near the seated Mary and Child, the Magi who came from the East bow down. The rest of the characters gathered here turned their curiosity on Madonna and Christ. The artist added a bright, impetuous ray of light from the sky, indicating the Divine couple.

Veronese did a great job at depicting the clothes of all the heroes of the canvas.

Magi are dressed in expensive multi-colored fabrics. Next to them are retinue in armor and the common people. You can watch a shepherd in the corner of the picture, which holds the dog for a leash.

The painter tried to convey the biblical scene in its sublime glory. The act of worshiping a born baby is shown emotionally and festively. At the same time, the author portrayed his contemporaries in the crowd: the expression of their faces, clothes, gestures. The result was a grand canvas, invariably attracting the attention of visitors to the London Gallery.