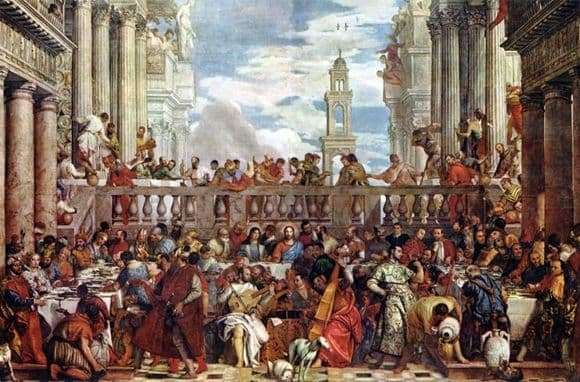 In the Louvre, exhibited a giant in its scale and striking in magnitude the gift of the creator of the picture – “Marriage in Cana of Galilee.” Painted canvas famous Venetian painter Paolo Veronese throughout the year.

In 1563, he completed a grandiose work that was placed in the refectory of a Catholic monastery by the monks San Giorgio Maggiore who ordered it.

The picture shows the Gospel scene of Christ’s first miracle: the transformation of water into wine, when it suddenly ended, to everyone’s chagrin. This took place at the celebration of the marriage in the Galilean village of Caen.

A large, food-rich table, in the center of which Jesus sits with the Mother, next to them are several disciples. Mary’s head is covered with a black handkerchief as a symbol of a quick mourning for Christ. Total on the canvas fit about 130 people. Visually, their placement in the picture can be divided into three zones.

In the foreground – a magnificent feast with an island of musicians in the middle. There is no reliable portrait of the painter Veronese, but the legend says that a man in a white robe with a viol in his hands is the author’s self-portrait. The rest of the band’s musicians were also real artists – the cornetist Bassano, Titian, and the quartet completes the great Tintoretto. The heroes of the occasion themselves – the bride and groom are in the left side of the table with the edge.

The middle part of the picture is occupied by bustling servants. Above the head of Christ, a symbolic action is depicted: a butcher raised a knife over a lamb carcass – a sign of a future sacrifice.

The upper plan is occupied by antique columns, of which there could not be in the real Cana. Curious onlookers are watching the feast from the white marble balconies. In the distance, the serene sky shines, clouds imposingly float on it, and flocks of birds hover.

Achievement of Veronese in the masterful ability to harmoniously combine the religious story with the luxurious outfits of his contemporaries and the atmosphere of the festivals of Venice of the XVI century.