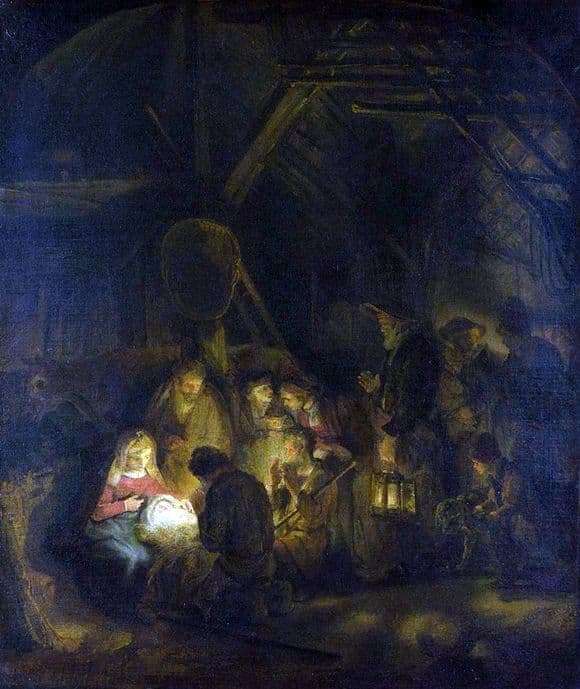 The plot of the picture depicts the scene of the Birth of Jesus Christ. Many Renaissance artists loved this theme very much. She gave the opportunity to show imagination, to interpret the event in the light of her vision. The gospel of Matthew says that on the day when baby Jesus was born, the magi came to King Herod and asked where his whereabouts was. Then they went to Bethlehem, and guided by a star, came to the house of Mary and Joseph. The magicians brought various gifts to the son of the Lord, which they immediately laid at his cradle.

But the legend did not indicate exactly how many Magi came to the Messiah and from which countries they arrived in Jerusalem. Translated from the church – Slavic language, “Magus” was translated as a magician, and they were rarely depicted on icons. This was due to the fact that they were considered astrologers and fortune-tellers who worship paganism. Religion did not recognize this kind of occupation, considering them ungodly. Based on Western beliefs, the Magi were three. One of them gave Christ incense, the other – myrrh, and the third – gold. The number three means the Holy Trinity and is sacred.

Rembrandt portrayed this episode incredibly realistic, giving it a deep psychological component. It is difficult to determine the exact age of the little Savior, who was depicted as a baby or a two-year-old child. King Herod ordered the killing of all children of infancy, which means that the Magi came to Jesus after he was two years old. This picture refers to the masterpieces of works of art, made in the magnificent manner of the master, who was able to convey with the brush the smallest details and shades of the mood of the characters. The canvas was proof of the skill and genius of the great artist.