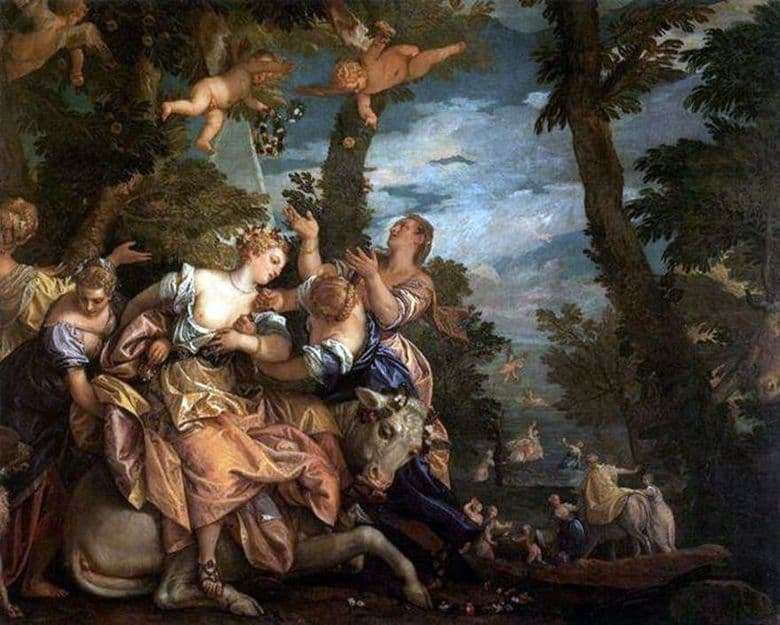 Looking at the painting by Paolo Veronese. Which has a rather well-known and symbolic name “The Abduction of Europe”, immediately evokes the memories of the myths of ancient Greece, the unsurpassed beauty of young Europe and the perseverance of the loving Zeus. The canvas itself is quite large-scale: it reaches a width of 3 meters and a height of 2.5 meters. The work was done in oil technique.

I would like to immediately note that many talented artists turned to the motive of love of Zeus and Europe. Each of them tried to look at the story in some new way, to bring something individual, exceptional, so that the viewer would believe it. Paolo Veronese did the same.

The painting depicts the story of the daughter of a Phoenician king named Europe. Her beauty was admired far outside the country, and the main god of Olympus could not help but react to this, because, as you know, he was fond of beautiful girls. Zeus decides to steal Europe and take it with him. But how to do it so that it doesn’t show itself? Zeus comes to the girl in the form of a bull and carries her far to the steppe. This moment was captured by the author on canvas. It is worth noting that as a result of this love, such mythical creatures as King Minos, Radamant and Sarpedon appeared.

When analyzing a picture, you immediately pay attention to a rather detailed and complex composition. The author managed the almost impossible: on such a large canvas, he painted in detail each character of this event, without losing a single one of them. But the main action takes place on the left side of the canvas. It is here that we see Europe sitting on the back of a mighty bull, and he is already ready to run away with her, where her eyes are looking. Only the friends of Europe hold the bull, but it lasts only a few moments.

Through the use of bright colors and saturated colors, the picture looks vibrant and super-realistic.