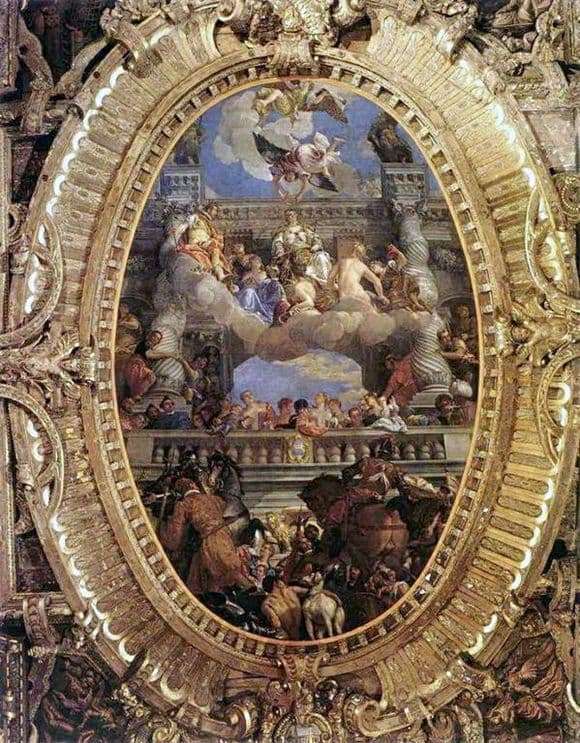 The oval-shaped canvas adorns the ceiling of the Great Council Hall in the Dodge Palace in Venice. On the creation of the picture took about 5 years. The exact date of writing is unknown, it is believed that the “Triumph of Venice” was created somewhere between 1580 and 1585.

The composition shown to the viewer is the coronation ceremony of the young Venice by the heavenly Angel.

The central place in the picture is given to the picturesque twisted columns and balustrades, on which many people rely. In the lower part of the canvas there is something like a balcony or a loggia filled with people of different gender and age. All of them are excitedly peering into the action that occurs in the height hidden from them behind the clouds.

Some of the people are so curious that they are trying to climb higher, using as support two huge columns depicted on the canvas, as if so that the viewer does not have a desire to look further than the author would like. The figures of people on the balcony and below it are virtues, which, according to the author, Venice has a lot.

In front of the balcony you can see several knights, as well as the heads of their noble horses. They also came to see an unprecedented sight. On the very balcony there is a banner with a coat of arms. Apparently this is the coat of arms of Venice.

Above the balcony and the people frozen in it you can see a clear sky, the blue of which contrasts with gray clouds and an arch of the same color. Clouds are something like the second floor, on which, in fact, the action takes place, attracting the attention of viewers. The clothes of people hidden in the clouds are rich, some of them are completely devoid of covers. The nudity presented to the audience is divine. The artist thought over and painted the smallest parts of the human body, managed to reflect the emotions and feelings that arouse the crowd.

The color scale of a cloth is diverse. The picture shines with bright colors, in no way inferior to the works of Titian, located nearby.