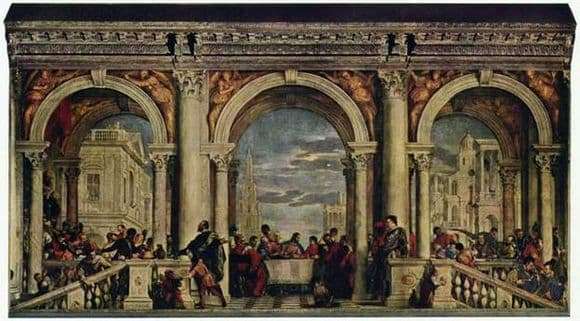 Paolo Veronese presented his work “Feast in the House of Levi” to the monastery, and a few months after that, he appeared before the court for distorting the biblical plot.

An analysis of the work revealed many unacceptable inconsistencies that the Inquisition did not just criticize, but signed the death sentence to the creator.

The image of a jester with a parrot caused particular indignation. It saw the symbol of debauchery, which did not fit into the moral foundations of the church. Initially, the painter displayed the “Last Supper”, but after the proceedings the plot had to be renamed as “Feast in the House of Levi”.

The master tried to prove that he filled in the missing details with the most aesthetic elements for painting. The artist changed the name of his work calmly, for him as a painter and esthete it was more important to preserve harmony in the image.

The Feast in the House of Levi is a true biblical story. Levi gathered mothers and sinners, riotous people in his house and made a feast. Everyone wondered how it was possible to eat and drink alongside sinners, then Jesus equated everyone.

In this story perfectly fit and a jester with a parrot, so incomprehensible in the “Last Supper.” The picture is inscribed in the arch, which is a classic method for decorating biblical scenes. One gets the feeling of being present in the theater, as if a theatrical stage opens up before a contemplator. All characters are bright and completely different. The main figure is Jesus, who unites all action.

Present on the canvas and the traitor – Judas. He is located on the other side of the teacher, he turned away, this position of the character is not accidental. Thus, the painter shows the true intentions of Judas towards Jesus.

The work affects the number of characters, clear and small strokes create the effect of photography and gives clarity to the elements of the work.