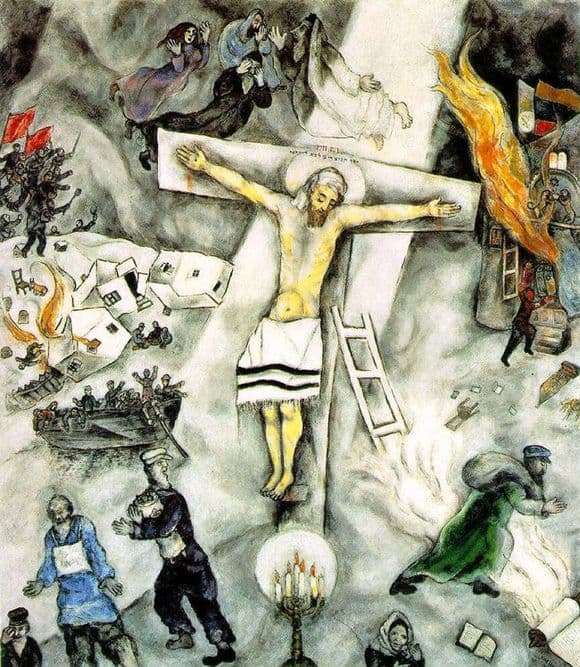 This is one of the best creations of Chagall. Here the artist’s constant thoughts about what is happening in his contemporary world are fully embodied. Thoughts are incredibly tragic. The tones of the Apocalypse have become major in the works of the painter, written before the war. Crucifixion takes first place among them.

The viewer does not see any unusual interpretation of the famous plot of the Gospel. The artist depicts a modern image. At its center we see the characteristic figure of Christ crucified, as well as scenes of pogroms of the Jews.

In this canvas, the piercing feeling of incredible tragedy is revealed as fully as possible. Christ fully symbolizes here not only the suffering of all Jews, but also of all people. In a world where wars are constantly going on, no one can be truly happy.

Chagall paints a picture in the very year when the Nazis staged a whole series of murders of an innocent Jewish people. If you carefully peer into the background of this grand creation, you can see a lot of small scenes. Each one is amazing. They reflected the disasters, pogroms, devastation and persecution.

Christ, who was crucified on the cross, seemed to suffer for all people and for what was accomplished. In Christ, we see the traditional attire for liturgies. This is a white tales with characteristic black stripes.

Incredibly significant white ray. He crosses this canvas (it is directed from the top down). This detail becomes the personification of the fact that the picture shows God. The Jewish injunction forbade drawing God. This ray illuminates Christ and becomes the personification of death being destroyed. It seems that the savior just fell asleep and did not die. This picture impresses with its incredible power. Chagall was able to masterfully convey the peace of flour that could not destroy hope. It is no coincidence that the canvas is much appreciated.