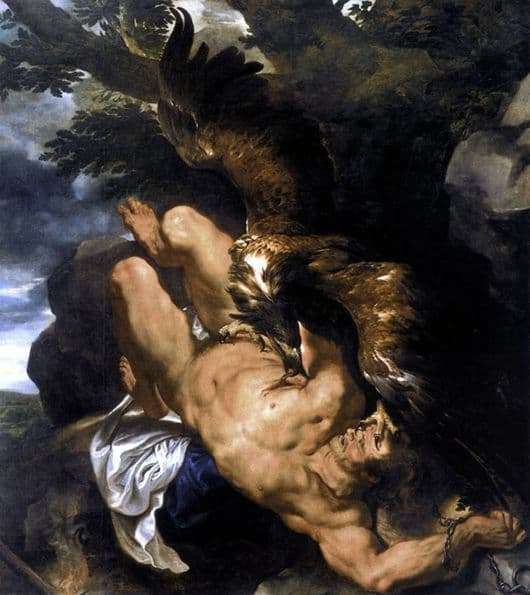 Everyone knows the story of the Greek myth of Prometheus. He was severely punished by Zeus. Him chained to a rock and doomed to eternal suffering. Every day the eagle flew and pecked at his liver, but the next day it grows again. Why did Prometheus deserve such anger? He, in secret from Zeus, gave people fire. That’s what Hephaestus nailed the body of the hero to the ridge of the Caucasus. There he stood for many years.

The theme of Rubens’ “Chained Prometheus” was this mythological story. But Rubens interprets it a little differently. We see the sufferer suffering, chained forever to the rocks, and the eagle pecks out his liver. Paw bird stands right on the face of the hero. The painter specially portrayed Prometheus so as not to show what hell of agony distorted his face. But the viewer sees an incredibly beautiful muscular body that is incredibly tense.

It is through him that the pain experienced by Prometheus is transmitted with maximum force. This is an incredible artist skill. The hero tries his best to use his powers to wriggle out from under the bird. But the strength is not enough, since the hands of Prometheus fetter thick chains. Every detail is important in this picture. Here everything conveys the main idea of ​​the artist about the constant struggle of a person, even if he is a prisoner. His spirit rebels and is not defeated.

The picture is incredibly colorful. There is a lot of black in it: it is both an eagle, and the sky, and gloomy rocks. The figure of Prometheus is central and the lightest on this canvas. With all the darkness of the colors used, the viewer does not have a feeling of hopelessness.

Prometheus Rubens fights even chained. He is not portrayed humble and depressed. The viewer has the feeling that with all the suffering, the hero is about to be released, you need to exert only a little more effort and the chains break, and the eagle will be defeated and punished for many years of suffering.